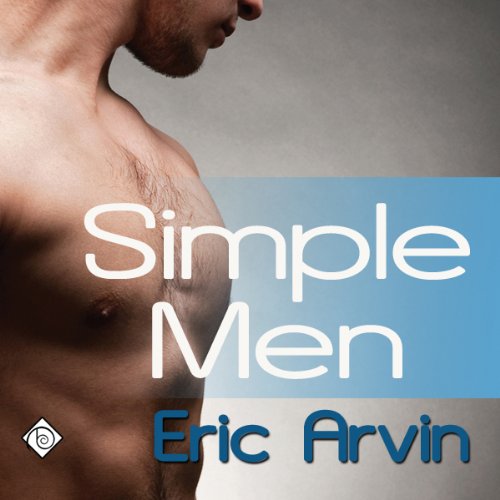 Chip Arnold is a well-liked football coach at a small liberal arts college, but his personal life is in a bit of a rut. He goes out drinking with his colleagues, gets along well with his players, and dates all the prettiest women in town - he has the life most straight men dream of. But lately none of the women he dates seem to be igniting any passion in him. Then he meets the new school chaplain, Foster Lewis.

Romantic attraction to another man is new and terrifying, and Chip just can't put his finger on why he's drawn to Foster, but it's stronger than anything he's felt for anyone in his life. Never one to back down from a challenge, Chip decides to go for it. But love is never simple, and sometimes it's a downright mess!

What listeners say about Simple Men

Romanticism at its best...

The premise behind the story of Chip and Foster is a bit contrived to say the least but the writing style of Eric Arvin envelopes you in such a manner that you forget the implausibility of the premise. Of course, this is from my perspective for I have never met a 40 plus year old man, a self-proclaimed ladies man who at the sight of the new man on campus becomes infatuated, lustful, and lovelorn in a short period. I am not meaning to dissuade anyone from this book, for the writing is engaging and Charlie David’s (a big fan of his anyways) narration brings the story to life. Charlie’s narrative abilities injects realism to the characters and carries the reader or listener to a far away campus where an adventure begins. Additionally, the secondary characters of Brad and Jason (I think that’s their names) and their budding relationship and persistent tomfoolery made me laugh out loud. All in all, Eric Arvin’s writing style and Charlie David’s narrative make this a must read or listen.

If you're a fan of the straight man turn gay or figure out he's gay then this is your book. Great story great chemistry and the narrator makes things that much hotter!

Didn't work for me

This review is killing me to write because I love when Eric Arvin writes fantasy. He is just such a unique thinker, such an interesting guy, that I was sure that I would love his contemporary stuff too. And when I saw that this was a GFY? No brainer! However, this was very hard for me to get through and I ended up DNFing at 75%.

Now, when I DNF an audiobook it is not done lightly. Audiobooks are NOT cheap and I am very choosy when it comes to my Audible listens. However, after over 4 hours of not liking what I was hearing I decided to call it quits.

My main problem with this book has to do both with the narrator and the writing style. The book had one of my GREATEST pet peeves: Constant head hopping. I'm talking POV changes sentence to sentence, paragraph to paragraph. There is no sense of who is talking because the POV is continuously shifting. To make matters worse, there are four MCs, so I was honestly confused a lot of the time.

In addition, the narrator, Charlie David, had absolutely no change in tone or intonation from person to person. He read each character and part exactly the same (perhaps because there was too much head hopping for him to keep track??) and that just added to the muddled listening experience. I have a STRONG preference for narrators that change their voice for each character. If I wanted to hear a book read entirely in one voice, I would just read it out loud to myself. I want a narrator that makes me feel the story, and a lot of that has to do with vocal differentiation for me. After listening to Chase in Shadow, where Sean Crisden manages at least 7 different voices, this just felt flat to me. It isn't that Charlie David doesn't have an expressive and pleasant voice, it just isn't what I'm looking for in a narrator.

In terms of the GFY, which I usually love, it didn't work for me. I found Chip's sudden sexuality change to be unrealistic. He seemed almost grossed out by other men and it made the GFY seem totally out of the blue. To top it off, it was strongly insta-lovely (I remember they were talking like their second or third time meeting and Chip said he realized that he loved Foster?? WTF?), which I despise.

I also didn't like having two couples in the story. It took away the focus from Chip and Foster and it felt awkward for me.

All in all, I didn't like this story. While I would buy another of Eric Arvin's paranormal or fantasy books in a heartbeat, I'll pass on his contemporaries.

Charlie David is a great narrator. He is the reason I choose this book.

While the characters in this book all acted about 10 years younger than they actually were, it was great fun. Chip's fear of squirrels and inner dialog were hilarious. I loved Kate's golf cart and Brad's and Jason's antics made me chuckle. The romances could have been more mature, but I laugh so much that it didn't matter - what's not to like about something that keeps you laughing.
.

Eric Arvin is a romantic. Contrary to the photo on the cover, this book isn't just about sex. It is relatively tame in that regard. It is about two different couples, one in mid-life, the other in college, who find love. It's charming in it's simplicity, and is deeply touching at times. This is not a great literary masterpiece, but it's perfect for a road trip or for listening around the house while you get your chores done. It's short, it's sweet, and I liked it a lot.

A swing and a miss

I’ll start out by saying the narrator, Charlie David, is great. He put lots of emotion into the character, but he couldn’t really “save” this book. This is a very weird and confusing story. Eric Arvin is a very good writer, but the story doesn’t “flow” very well. It is really two mm romance stories that occur at the same time; Chip & Foster and Brad & Jason. Chip is a straight football coach that has “insta love” for the new chaplain, Foster. OK I can go with that. But then the relationship takes these huge leaps that even I, who am pretty laid back about unrealistic events happening in a fictional story, couldn’t buy. First, Chip has very little angst about falling in love with a guy for the first time in his life. Then Foster “outs” Chip to his boss and no one, including Chip bats and eye. The other couple, Brad and Jason, are just annoying to me and I really don’t get why they are even there. That said, there are also really fun moments like when a killer squirrel (in Chips estimation) invades Foster's chapel and Chip comes to the rescue. When Chip tried and fails to subdue the squirrel he says "Oh it's going to remember that." and Foster replies "It's a squirrel, not the mafia." Lines like that make me want to overlook the other stuff, because that is just funny. Alas, I couldn’t because after holding out hope, the ending was bad too.

What did you love best about Simple Men?

It was sweet, funny sometimes and full of love

Have you listened to any of Charlie David’s other performances before? How does this one compare?

His voice is sexy hot!

If you could take any character from Simple Men out to dinner, who would it be and why?

the lady with the golf cart, she was funny

I'm glad I got this book, I will definitely listen to it again. It's a feel good book

Great for a long car ride

What made the experience of listening to Simple Men the most enjoyable?

I'm a great fan of m/m romances and I own quite a few. I also travel for work which involves 2+ hour car rides. So I'm always looking for an interesting well written story. Many m/m romances have great love sex scenes, but the story and the character development isn't well developed and scripted and we don't see how the characters fit into the larger world. Simple Men did a good job of doing all the above. It's not a stellar plot by any means but we do get an opportunity to meet the characters, understand them in their past and current setting. We can see them as real and flawed and we understand why they do what they do even if we don't agree with them.

This story has an added subplot so you actually get two love stories for the price of one. Interestingly it's the sub plot that I'd have liked to see developed some more; but at the end you get to see both couples and you understand how one influenced the other.

I don't like to tell plot lines in reviews so I won't do that here either. But I will say that I quite enjoyed the story.

Remove the high strung annoying girlfriend and I don't quite see how or why the Chancellor was involved. He was peripheral and something else could have been used the move the plot line along. And after the main character and the girlfriend went on hiatus, she could have been removed. The fact that the second main character was all caught up in her angst was annoying.

I'm fine with his performance.

Yes ... remember I get audible books for long car rides .. ideally I'd like to hear it one sitting or at most 2 ... one for the go leg and one for the return leg.

A little slow and frustrating throughout but I did enjoy the relationships between the boys, coach, Chaplin and women. Have not quite accepted if Chip if bisexual or gay. I suppose the latter is what the author is leading to.

This story could have been awesome with a great narrator but it bombed big time.