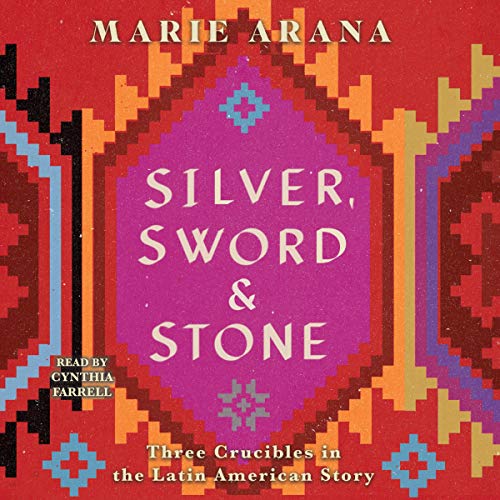 By: Marie Arana
Narrated by: Cynthia Farrell
Try for £0.00

Acclaimed writer Marie Arana delivers a cultural history of Latin America and the three driving forces that have shaped the character of the region: exploitation (silver), violence (sword), and religion (stone). “Meticulously researched, [this] book’s greatest strengths are the power of its epic narrative, the beauty of its prose, and its rich portrayals of character…Marvelous” (The Washington Post).

Leonor Gonzales lives in a tiny community perched 18,000 feet above sea level in the Andean cordillera of Peru, the highest human habitation on earth. Like her late husband, she works the gold mines much as the Indians were forced to do at the time of the Spanish Conquest. Illiteracy, malnutrition, and disease reign as they did five hundred years ago. And now, just as then, a miner’s survival depends on a vast global market whose fluctuations are controlled in faraway places.

Carlos Buergos is a Cuban who fought in the civil war in Angola and now lives in a quiet community outside New Orleans. He was among hundreds of criminals Cuba expelled to the US in 1980. His story echoes the violence that has coursed through the Americas since before Columbus to the crushing savagery of the Spanish Conquest, and from 19th- and 20th-century wars and revolutions to the military crackdowns that convulse Latin America to this day.

Xavier Albó is a Jesuit priest from Barcelona who emigrated to Bolivia, where he works among the indigenous people. He considers himself an Indian in head and heart and, for this, is well known in his adopted country. Although his aim is to learn rather than proselytize, he is an inheritor of a checkered past, where priests marched alongside conquistadors, converting the natives to Christianity, often forcibly, in the effort to win the New World. Ever since, the Catholic Church has played a central role in the political life of Latin America - sometimes for good, sometimes not.

In this “timely and excellent volume” (NPR) Marie Arana seamlessly weaves these stories with the history of the past millennium to explain three enduring themes that have defined Latin America since pre-Columbian times: the foreign greed for its mineral riches, an ingrained propensity to violence, and the abiding power of religion. Silver, Sword, and Stone combines “learned historical analysis with in-depth reporting and political commentary...[and] an informed and authoritative voice, one that deserves a wide audience” (The New York Times Book Review).

What listeners say about Silver, Sword, and Stone

Marie Arana does not Understand Economics

Marie Arana's book is weird and sad. There is a weird chip on her shoulder. The book is alright if you want to feel sorry for your self for 10 hours, there are some new things here to be sorry about. But the issue is that Arana's understanding of Economics and the Renaissance-World is weak and amateur. This is nationalist historical literature similar to Eduardo Galeano. By the way, Galeano regrets his old work.

(1) Style: In a different book, she makes a big point to say that Bolivar travelled more miles, affected more nations, and other things more than George Washington. This is weird and shows a lack of self esteem. You don't see George Washington books attack other leaders like Bolivar, Kamal Ataturk, or Garibaldi. All these dudes were national liberators and GW's nation is still around. Grand Columbia is gone. But why? This low self esteem style continues in this book.

(2) In this book, the Spaniards are the bad guys, invaders, smelly, and other problems. Ok. But the Spaniards were invaded the same way as Cortez, by many other people. Julius Cesar actually conquered Extremadura, and afterwards, Numancians actually joined Cesar in the invasion of Britain and conquest of France (Gaul). The Spanish had to fight many Mediterranean rivals for their sovereignty. They were actually only recently fully free of a 700 year Islamic occupation when Columbus reached America. They were actually still fighting for the right to exist even as Cortez and Pizarro were living. Lepanto, Siege of Vienna, and Siege of Malta all happened after Cortez. You will never understand this from this book. Arana seems to think that Spain just wanted gold to swim in the coins. Could it be that Spain was only a member of a violent world structure of this time. Does Arana understand that Spain was actually fighting a World War with the Ottomans at the same time? That Spain conquering Mexico is actually small potatoes compared to Timur conquering Persia just 200 years earlier. She thinks that rocks gave us capitalism, when it's the other way around. The stuff is worthless jewelry unless you can put it to use. Gold sandals and necklaces are worthless, except some folks love jewelry.

(3) Also, Arana does not cover Francisco de Vitoria. The actual Spanish renaissance government and Catholic intellectuals declared what Cortez and Pizarro did to be Illegal. The University of Salamanca officially declared the destruction of Native Americans illegal. Quite enlightened. Had another nation landed in Spanish America in 1492, there would not be the equivalent demographics of Indigenous-European people as the super majority. Us indigenous are still here and fully in-charge, but Arana's book is trying to eulogize us like we are dead or something. Nope, still here. I don't even look for gold, silver, copper or even own jewelry. It's probably the Spanish contrition to all this violent activity that makes the history what it is. You won't see Mongolia worrying about the grandeur and splendidness of Han Dynasty they conquered. You won't see Morocco talk about the splendid and ancient Celtic culture they tried to replace in Iberia or the slaves they took from there. Nope, will never happen.

(4) Finally, the Economics is sad and discredited. It's quite out-of-date. Singapore does not have any of the resources of most LA countries, yet the chaps in Singapore are going to be greater and richer than NYC. Why? Because rocks don't matter quite so much as Arana thinks. Trade and Inventing makes countries rich. That is why Facebook, Amazon, Google, and Paypal are worth more than any Oil company. What is the biggest Gold Mining company? Does it matter compared to Tesla or SpaceX? Sitting on a big pile or raw material is not as important as the final products, the invented products. Arana needs 101 classes in Stores of value. Gold is a metal, industrial material, real money currency, and a store of value, it's necessary for war, when countries are not producing, just consuming. Britain during the Napoleonic wars needed the Rothchilds to control a species advantage over France. That's how you pay for stuff and pay soldiers, otherwise they got to loot and pillage people. Or they starve, like Valley Forge. How come Arana does not know this? Hmm? Too busy plagiarizing Galeano diatribes. How about that New World gold actually created a massive inflation in Europe, it wasn't such a huge help. Charles V was ultimately cornered in an Alpine Castle, ran out of money and had to make a deal to abdicate to Phillip.

(5) Obsessing about raw materials is Vladimir Lenin's economics. This is why Castro and Chavez basically destroyed the rich countries they took over. Obsession with raw materials instead of Real Economics is the issue. Today, Spain is a first world country, selling culture and manufactured goods. Costa Rica sells tourism and experiences. Want to get rich and stable? Start inventing, trading, and exporting. Don't tell Arana, but Latin America even has a happy middle class and rich people that are not involved in Mining. Who are the #1 mining nations, the USA, China, Russia and Australia. Not even 1% of the population in the USA works in mining and most don't know they are #3 and it does not matter to them. No Latin country does anything close to the USA in Mining GDP. Again weird logic with a chip on the shoulder.

(6) Lastly, do Brits still obsess about Tin? That's what brought the Romans (with Numancians) in 54-BC. Do you have solitary and emaciated brits working in caves looking for Tin today? Nope, that would only happen if Tin ore were the only thing they could produce and sell. But, luckily for the Brits, they can better use their people in making high tech stuff, selling financial services, and producing entertainments we all enjoy.

I am very grateful to Maria Arana for writing this book. I want to form a book club so that I can listen to it again, and have an opportunity to discuss it with others. I also have South American heritage, and I deeply appreciate this window into history and how it has shaped present day events, and this glimpse of who we are. I listened to many of the chapters more than once, just to make sure I caught everything in them. I never got bored-- it is a gripping account -- and I plan to listen to the whole book again soon. The narrator was excellent.

This is an extrordinary, sad, document of the conquest, rape, pillage, despair, and distress, of latin America post “discovery.” Beautifully written, brutally honest and incisive, and, at the end, sad, it is as if there is no hope for Latin America, besides a few brave souls whose bravery stamps stamps spots of fleeting hope, here and there, for some time.

A great work for someone like me who knew little of the history of South America. A great introduction with a broad arcing framing making it nicely understandable.

Essential Reading: Should be made a Netflix Series

Connecting the dots throughout 500 years of Latin American history, in an eye opening way, that is not taught in schools, across US, Latin America or Spain. It’s beautifully written, but you will need to be courageous. I would love to write the agreement to make it into a Netflix series.

Repetitive. The Arana’s favorite expression is: “ from time immemorial.” The history Araña provides is important and she relates it passionately.

Doña Marie, please see to it that this work and the Bolivar biography get put into Castellano. I love your work!