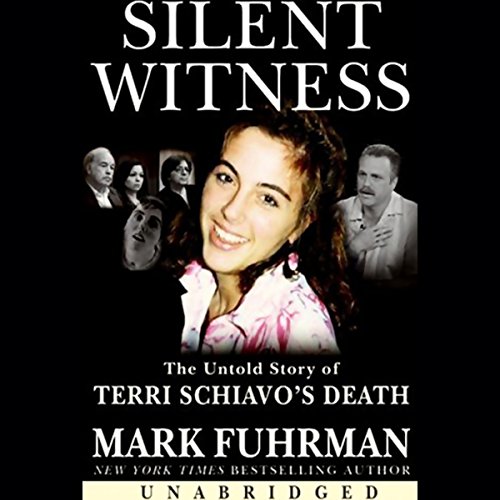 We all watched Terri Schiavo die. The controversy around her case dominated the headlines and talk shows, going all the way to the U.S. Supreme Court, the White House, and the Vatican.

And it's not over yet. Despite her death, the controversy lingers. In Silent Witness, Mark Fuhrman applies his crack detective skills to examine the medical evidence, legal and police records. He conducts exclusive interviews with forensics experts and crucial witnesses, including friends, family members, and care-givers.

Fuhrman will answer these questions:

Fuhrman has complete cooperation of Terri Schiavo's parents and siblings, as well as their medical and legal advisors.

The legal issues and ethical questions provoked by Terri Schiavo's extraordinary case may never be resolved. But the facts about her marriage, her condition when she collapsed, and her eventual death 15 years later, can be determined.

With Silent Witness, Mark Fuhrman will go beyond the legal aspects of the case and delve into the broader, human background of Terri Schiavo's short, sad life.

What listeners say about Silent Witness

A Case Not Suited for Analysis

I have read his books previously and have found them interesting. But I found this book disappointing. His other books have had forensic evidence which could be studied and a police investigation which could be analyzed, but this case lacked both. And I disagreed with so much of the "evidence" being based on doctors' notes as to the time of the events - it is evident to me that the various doctors just wrote the course of the event generally without any consideration that one day it would be used to prove malicious intent or deception. I would skip this book.

A textbook in speculation

The "untold story" of Terri Schiavo in the eyes of Mark Fuhrman turns out to be nothing more than the untold and unfounded speculations of the people who lost this fight and need somebody to blame.

There's no such thing as fact or conclusion in this book. It's just hour after hour of could-have's and might-have's and nobody-will-ever-know's without a single shred of real evidence to back anything up. Even Fuhrman's technical descriptions of Schiavo's medical condition are self contradictory - he just can't seem to help himself when given the opportunity to exaggerate something he thinks will help his case. Every "fact" is twisted to fit Terri's family's concept of what happened and quotations from sources are routinely taken out of context in ways so blatant it leaves you laughing. As a writer, Fuhrman apparently believes that his audience is a group of second graders who are willing to believe anything he might say no matter how outrageously contrary to common sense his reasoning becomes.

In the end this book is about one thing: how much Terri Schiavo's family hates her former husband and what lengths they and their supporters will go to try and bring him down. This is a long, boring rant about Michael "Mr. Evil" Schiavo and all the horrible things people think he might have done but just can't seem to find a single shred of evidence that actually proves he did it. It's a political and social waste of energy written by a man who's stuffed his objectivity in his sock.

If you're thinking of spending money for this book I would strongly suggest a copy of the Weekly World News instead. You'll find it just as object and factual and much more entertaining than anything Mr. Fuhrman can serve up. I give this book +1 star only because -5 stars is not an option on this site.

It's a shame Mr. Furman got the last part wrong - he claimed that the autopsy would prove that Terri would have been able to be rehabilitated. We know now that, as medical experts said all along, she was not going to come back.

I think this whole mess should have been treated as a private, personal matter, so I don't recommend purchasing this book.

Given Fuhrman's association with Fox news, I expected this book to push a conservative point of view, and maybe even a religious point of view. Instead, we get a very balanced, logical account of events, reflecting Fuhrman's career as a homicide investigator, with a focus much more on how Terri ended up brain damaged, and very little on the right-to-life/right-to-die debate. For many people, attacks directed at her husband were seen as merely a means to an end, to keep Terri alive. This book shows that there was much more to the controversy.

On the other hand, the book was clearly rushed to print, and could use a heavy dose of editing. I found this difficult to understand. If the publisher just waited a couple of weeks, the book could include information from the autopsy (even though this information had little relevence to Fuhrman's argument), or gleaned some information from the investigation going on in Florida.

So I give this book a marginal thumbs up, but I expect better books will be written about this subject in the near future.

The fact that this has even been published is a sad reminder that human greed knows no bounds.

Crazy!!! Your greed astounds me! Let her rest in peace!

This book really explained the case. Sometimes there are no answers, but I was happy to have the insight.