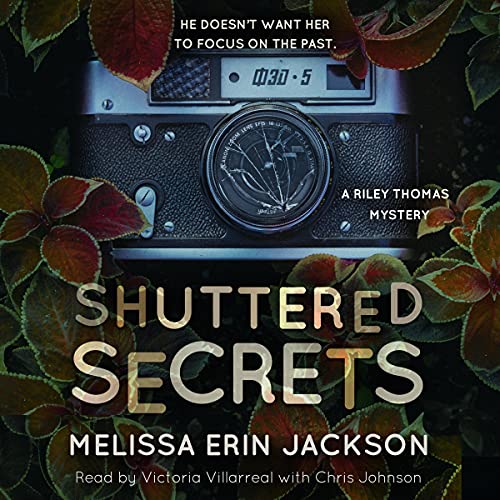 He doesn’t want her to focus on the past.

It’s been six months since Riley Thomas, reluctant medium extraordinaire, has had a ghost haunting her apartment, and she prefers it that way. Life is less complicated when the dead aren’t trying to get her attention. Her best friend is getting married and wants to DIY her way through wedding prep - Riley’s got no time for ghosts.

One of Jade’s wedding must-haves is vintage film cameras her guests can use to help document the big day. The months-long hunt for relics leads to a thrift shop jackpot, and Riley adds the cameras to the growing pile of wedding supplies in her apartment. That night, Riley gets a midnight wake-up call from a ghostly Black woman in a yellow dress.

Even after the haunted cameras are removed from the apartment, the ghost woman keeps popping up, both in Riley’s dreams and in the corner of her eye. Tracking down the previous owner of the cameras proves difficult, and as Riley digs deeper, she uncovers a link between the cameras and two murdered women - one white, one Black, yet neither one is Riley’s mystery woman.

Though the identity of the ghost proves to be as elusive as her predator, Riley is determined to uncover the truth of what happened to these women. But now someone knows she’s looking...and he’s hell-bent on making sure he finds her first.

What listeners say about Shuttered Secrets

Although I struggle to relate to Riley since much of her logic eludes me, I truly enjoy the mystery and the interaction of Riley and Mike. The couple (and their respective families) is truly hilarious and I find myself somewhat envious of their relationship. The exact opposite of J.D. Robb's famous Dallas and Rourke and SO much more loveable and believable. I'm sorry this was only a 2 book series, I would have liked more. However, at least I won't have to watch a beloved series disintegrate into darker and darker situations as the author tries to keep it going after exhausting original ideas. I hate when I have to give up on a favorite series in disgust, I would rather be left wanting more.

First, I hope this is not the last book you write in this 2 book series. The Riley Thompson series is one of the best series I've read in quite a long time. Your writing is too good for even me to explain. I am at a loss for words on how wonderfully terrific not only your writing is, but the story line in both books is just beyond words. I have been reading the paranormal, occult, etc since I was a kid and was even told while still in high school I should consider writing as a career. I did some short stories, poetry, etc. at that time, but eventually desided that breaking the glass ceiling at a financial firm would probably be a better fit, and, of course assured me a good salary. Though I only made it to Vice President in my firm and at 58 was able to retire.But, my love for reading the paranormal has never wained and at 73 I am still reading in the genre of the occult, fantasy, etc. These 2 books are so well written and since my eyes aren't great I only read books in audible. The performance is only a plus to make this series so easy to read, I read the 22 hour set in 2 days. Stephen King and I are the same age, so I started out reading so many of his books and loved them and still do and still read his new ones every year. You, like him make the characters come to life and acutally allow you to live the story as you plot it out. I could give you a 10 star review if it existed. Take my advice for what it is worth and keep writing more books in this series. They are more than wonderful and I will read them all. It's been a long time since I've found another author this well written with a story so terrific. I really enjoy your wor.