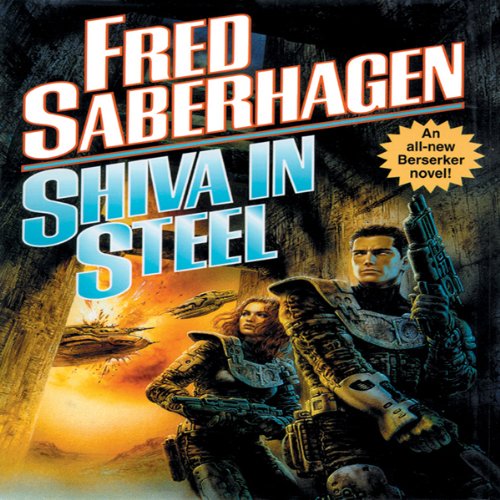 By: Fred Saberhagen
Narrated by: Edward Lewis
Try for £0.00

Shiva in Steel is the latest installment in Fred Saberhagen's Berserker series, a chronicle of a race of intelligent machines devoted to exterminating all organic life.

In a sector of the Galaxy occupied by Earth-descended people, one Berserker computer has suddenly and mysteriously developed a tactical strategy unlike anything the human opposition has seen before. Shiva, like the Hindu god of destruction after which it was named, annihilates entire colonies with the help of its fiendish subordinates. Commander Claire Normandy struggles to prepare for Shiva's attacks, while Pilot Harry Silver realizes that he must deal with his own demons in order to help her. When a decision is made to destroy the destroyer, neither side is prepared for the incredible risks that emerge as the attack becomes imminent. Can either side face the possibility that something wholly unexpected and eerily familiar lies gnarled within the steel?

"Super saber-rattler Saberhagen strikes again." (Publishers Weekly)
"The Berserkers, in their single-minded pursuit of their pre-programmed course of destruction, they attain a kind of perverse stature that makes them worthy of stand-ins for the dark side of human nature." (The New York Times)

What listeners say about Shiva in Steel

Worst Reading of a Story Ever!

I am a casual fan of the Berserker series and like to read one every so often as a new title pops up. This book is on par of what to expect from the most recent Berserker books (a lot of diologue with little action). However, the reader of this audiobook makes it almost unbarable to listen to. You know when he stops at the end of a paragraph because he stops - for 2 to 3 seconds - EVERY TIME!! Also his inflections of the different characters make them all sound whiny and paranoid. After listening to the masterful presentation of the Ender Trilogy by Orson Scott Card, this book is the audiobook equivalent of nails on a blackboard. Do not buy or you'll be sorry!

I wish I had read the previous review before I had downloaded this book. Unfortunately, I had short notice on a road trip and wanted something entertaining to pass the time while driving. I've listened to several of the other Berserker novels read by Barrett Whitener and always enjoyed them.

But, while Whitener's reading enhances the story, Edward Lewis's "screeching" of the book completely detracts from the experience. If I hadn't been on a long night time drive with nothing else to "read" on my ipod, I could never have finished the story.

Besides the ridiculously long pauses between paragraphs and the absolutely awful voice characterizations for the different characters,Lewis frequently butchers the book by completely screwing up the inflection and timing of the clauses in any mildly complicated compound sentence.

Although it is difficult to judge the merits of the book without being influenced by the poor reading, I thought that this was the least interesting of the half dozen of so Berserker books I have read or listened to. It seemed that every time a character or situation would start to get interesting, 10 or 15 pages of pointless dialog would follow which usually turned out to have little or no significance for the rest of the book. Even the ending was unsatisfying.

All in all, probably the worst experience I have had in over four years of being an enthusiastic Audible listener. About the only good thing I can say is that I had absolutely no trouble staying awake all night while I was driving - but it was the adrenaline flow caused by anger and frustration instead of the pleasant anticipation of the resolution of an interesting and entertaining story.

only narration worse was ...

After 4 tries to finish this book I have to say that the only narration I've heard that was worse ...
couldn't think of one. Either the director or the narrator has a horrible sense of timing. There have been narrators I'd avoid but would listen to for favorite books. There is no book I'm so desperate to hear that I'd endure this reader again.

I wish I had read the other reviews before I purchased. The narrator reads as if every character is angry. The timing is terrible ... He reads quickly and they must have decided the only way to stretch the book out was to put in horrible pauses (mostly in inappropriate places). I had not read this book first, and now it will be forever ruined for me.

If you buy this, you're risking your sanity

I'm amazed anybody could give this audiobook 5 stars. As noted by other reviewers, the narrator is exceptionally bad. There might be a good story underneath it all - from what I could tell, Shiva in Steel is up to Saberhagen's usual standards - but whatever quality the story might have is submerged under a combination of hurried phrasing, awkward pauses, and robotic inflection. This audiobook wasn't "read", so much as "stated". Almost every single sentence, including those by the characters, was treated as a stand-alone statement. The effect was like listening to the greatest hits of a bored airport announcer. Avoid!