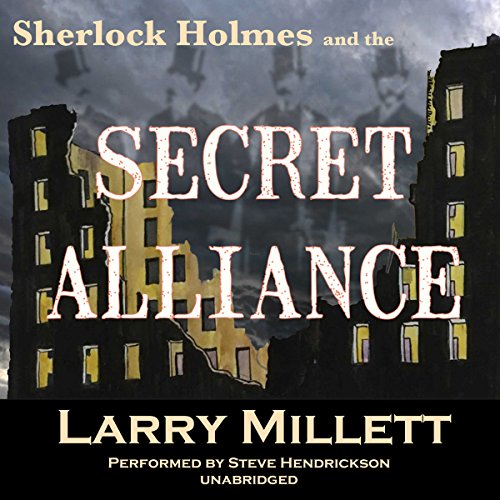 Sherlock Holmes and the Secret Alliance

By: Larry Millett
Narrated by: Steve Hendrickson
Try for £0.00

As the city of Minneapolis prepares for a visit from President William McKinley, someone else prepares for murder. On the day before the visit, a union activist is found hanged, naked, outside a ruined mansion. A placard around his neck reads "THE SECRET ALLIANCE HAS SPOKEN." Who is the alliance? What does it want? How was the victim involved with the city's corrupt mayor? And why did he possess a photograph of a prominent citizen in a compromising position? Shadwell Rafferty searches for answers, encountering bribery, corruption, union organizers, anarchists, and conspiracy, putting himself in danger. But as luck would have it, his old friends Sherlock Holmes and Dr. John H. Watson are on their way.

What listeners say about Sherlock Holmes and the Secret Alliance

So far I'm listened to the first 4 books in the Holmes-in-Minnesota series. This is the best plot of the 4, but Holmes/Watson barely play a role. So, if you've listened to books 2 and 3 and enjoy Rafferty, you'll like this book very much. If you prefer a more "pure" Holmes book then take a pass on this one.

Characters are very good. Story good. Plot twists good. Ending is rather abrupt...you're left to the postscript to find out how many of the loose ends get tied up, mostly thru a convenient letter. Essentially, it's the author saying he didn't know how to tie together all the storylines so here's a bullet-point list. Don't mean this to be overly critical...the book is very enjoyable.

This is an impressive story. It has so many different threads, and they all weave together in a way that is elegant and even believable. You will be guessing until the end on the true nature of the crimes and the persons and situations that Rafferty and Holmes come across. This was the best Millett story to date in my opinion as far as cadence and content. Filled to the brim with detail. Pretty amazing.

Larry Millett continues the Sherlock Holmes tradition with aplomb. I liked the narrator and storyline.

I would have given this 5 stars but didn't care for the new reporting style of prose.

Sherlock Holmes and the Secret Alliance

Another enjoyable Sherlock Holmes mystery solved. I love that previous characters arrive and are helpful. I enjoyed this book. I recommend it!

Best adventure in this series, so far at least.

This may be the most fantastical, complex, & "out there" plot yet, but despite the complexity of it, is clear and the easiest to keep up with. Holmes & Watson are not really the main characters, either, for Rafferty & Thomas do most of--perhaps even the best--detective work. In fact, a fat as in concerned, it's time to drop this version of Holmes altogether and change the series over completely to the mysteries & adventures of Shad Rafferty with his partner GWT. And, to Larry Millet, "PLEASE DO NOT bring SH back to MN again! Stick with your own original detective instead." I don't see Book 5 available on Audible, yet, but I'll be looking for it-- to read more about Rafferty's cases.

Not a Sherlock story

This is not a Sherlock Holmes story, not really. Why create a Sherlock competition or look alike?

Not good at all

Organized crime circa 1899. Irish mobsters as terrible then as they are today. Millett and Hendrickson equally bad.

this nearly could have been an email.

It was a fast-paced, multi-charactered story. Expertly read, nice tension between many characters and situations. Gripping and full of adventure.
Despite its time period, much content was relative to today.