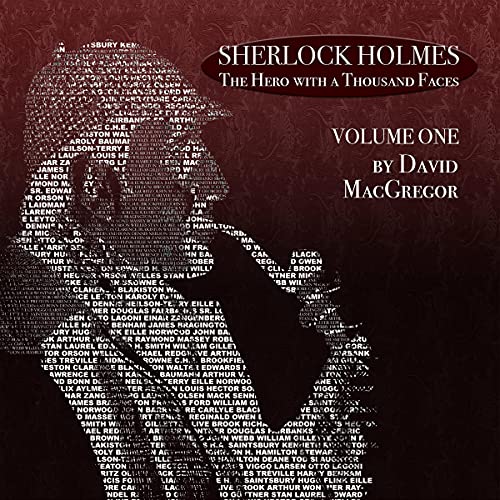 Sherlock Holmes: The Hero with a Thousand Faces, Volume 1

By: David MacGregor
Narrated by: J.T. McDaniel
Try for £0.00

In the early 21st century, Benedict Cumberbatch gave the world the definitive portrayal of Sherlock Holmes in the BBC's Sherlock.

Then again, Jeremy Brett had been declared the "definitive" Holmes in Granada Television's series in the 1980s. The same was said of Basil Rathbone's performance in 14 films before that, and William Gillette's version of Holmes on stage at the turn of the 20th century had also been lauded to the skies.

In short, all four actors were declared to be the "definitive" Holmes, and yet their various interpretations of the greatest character in fiction could not be more different.

Graced with a foreword by Sherlockian guru Roger Johnson, this audiobook sets out to trace the evolution of Sherlock Holmes and his audience across three centuries.

What caused Victorian readers to respond with such fervor to Arthur Conan Doyle's creation?

How did an eccentric American actor from Connecticut become acclaimed as the definitive Holmes on both sides of the Atlantic?

Who were the original fanboys who ushered in the concepts of fandom and cosplay in the 1930s?

Using extensive contemporaneous accounts and reviews, Volume 1 explores the process by which Sherlock Holmes evolved from being merely a character in detective stories into a genre, industry, and global phenomenon all his own.

What listeners say about Sherlock Holmes: The Hero with a Thousand Faces, Volume 1

If you, like me, loves Holmes & Watson stories, this book is a must.

It really analyze almost all the related works (as the author says, it's impossible to even be aware of ALL the works related to Sherlock Holmes) in every media; yes, even fanfiction. Which, of course, is what the early pastiches were after all :P

And, as a fan of both universe, I particularly enjoyed the parallels he bring up front between Sherlock Holmes and Star Trek ♥

It's really interesting how he explore the way in which social and/or geographical settings change the way in which our heroes are presented; how early adaptations of the canon (like William Gillette'movies) have influence not only over future pastiches but even in the later works of Conan Doyle, and how each new adaptation has an effect in the next ones.