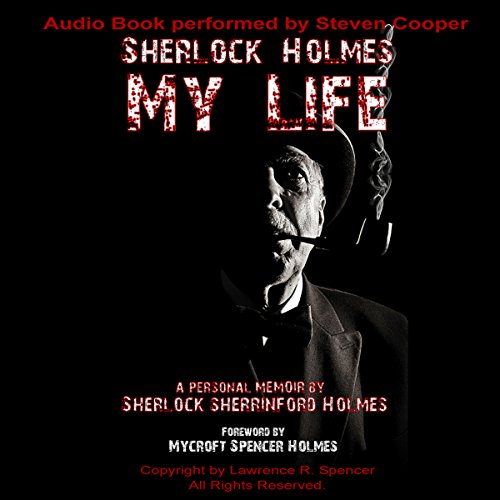 By: Lawrence Spencer
Narrated by: Steven Cooper
Try for £0.00

A memoir in which Sherlock Holmes discloses a conspiracy, between Dr. Watson and Dr. Arthur Doyle, to publish his real life adventures as works of fiction. Mycroft Holmes, his brother, aided by the British Secret Information Services, is solicited by Mr. Holmes to assist him to resolve the most infamous literary fraud in history! Their investigation of the doctors, publishers and politicians who collaborated with them, exposes the scam as well as the farcical claim to knighthood of "Sir" Arthur Doyle and his life as an opportunistic hoaxer. A plan to erase the real person of Sherlock Holmes unveils the true identity of Professor Moriarty. In retrospective retirement, Mr. Holmes describes the unrecorded adventures of his life: encounters that influenced the literary creations of Lewis Carol, James Barrie, Mark Twain and Bram Stoker. The book confides details of his use of alchemical potions, his family, and sexual preference. His personal philosophy is expressed in several poignant personal letters.

What listeners say about Sherlock Holmes: My Life

The Preiminent Holmes Novel -- His Autobiography!

Yes, most especially the serious study of Sherlock Holmes. This book is the culmination of 30 years study of the accumulated works of Arthur Conan Doyle, and of the literature of his literary contemporaries, ca 1850 - 1910.

What was one of the most memorable moments of Sherlock Holmes: My Life?

The two meetings between Lewis Carroll (author of "Alice in Wonderland" and Sherlock Holmes.

Which character – as performed by Steven Cooper – was your favorite?