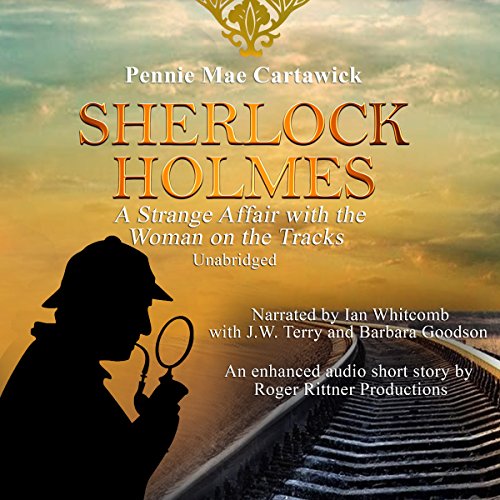 Sherlock Holmes: A Strange Affair with the Woman on the Tracks

An enhanced audiobook, with complete music score and extensive sound effects to add to your listening experience.

Jane screeched at this further betrayal and went for Henry. They began to struggle. Henry was the stronger out of the two, yet the woman's pain was unstoppable. His hands wrapped around her throat and Jane clawed at his face until she fell. She lay there, across the tracks, and was quite still. Mrs. Cavell gasped in shock and Henry ran past us back to the train. We stared down at Jane's body.

What listeners say about Sherlock Holmes: A Strange Affair with the Woman on the Tracks

Only criticism is that some of the background sounds distract from the narration. Will listen to again. Nothing to add.

This short Sherlock Holmes story was a real treat. It centered on a dinner theater given on (and off) a train, and involved diplomats as well as some Sherlock regulars. I was glad Mycroft was utilized as well as he is someone you love to hate and can be a shady character, but in the end usually has Sherlock's back. I found myself trying to unravel all the clues until the end. And then there was another cool, spooky twist at the very end!! This was a neat, short story which I listened to as an audiobook. The characters were spot-on as far as the Holmesian Canon goes. I would definitely recommend this to anyone who is a Sherlock Holmes fan.