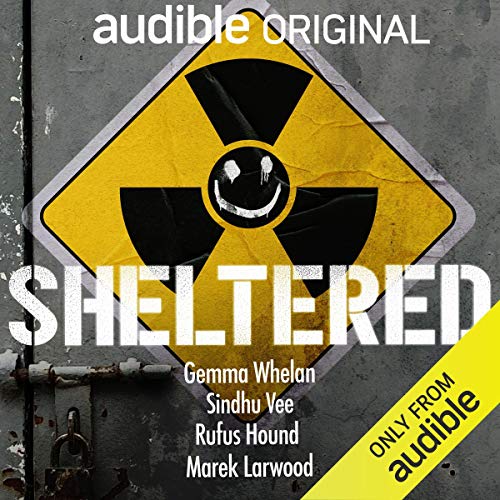 What listeners say about Sheltered

Theres not much i need to say than, you guy's really need to make a part 2 or a full audiobook, i want to see more from these guys and stories they have to tell!

I am not the Gary!

Hilarious and clever in equal measure with an amazing cast. Can’t wait to hear more.

Awful. This is truly dire.

Was this supposed to be a comedy? It reminded me of the insipid tripe that passes off as comedy sometimes on the midmorning radio 4 schedules. Listened to about half an hour, and it was neither gripping as a drama or funny as a comedy. Reminded me of those average all round cricketers, who claim to be able to both bat and bowl but can, in fact, do neither very well. I've not lost interest in an audio book so quickly after starting it. Just glad it was free.

not even remotely funny

Finished two episodes to give it a reasonable chance. The story is extremely thin and the mild attempts at social sarcasm just are too obvious to even raise smile. Avoid.

I'm sure you'll be hearing plenty more from this team.

Brilliant sci fi comedy, immersive production, with a great cast - perfect for getting lost in...

great and charming mininseries. reminds me a lot of the game fallout but portrayed like red dwarf. really impressive. well done.

Shame there are not more episodes!

Great acting from the cast, they made the journey really enjoyable. Bizarre story that was a romping ride, highly entertaining. Only issues was with the psychiatrist episode as it was sometimes difficult to make out what the robots were saying. but overall a great podcast. Shame there are not more episodes...yet.

18 seconds in and I'm confident I've found what I've been looking for since finishing the Bobiverse. And it's British 👍 Will update once finished.

Look forward to the next installment!

This was awkwardly overdone...

The performances were great but the dialogue was way beyond explicit. There was too much cursing and sexual activity to take this all in. This felt like a "Family Guy" type of nonsensical banter that might have made me chuckle a few times, but then I felt horrible avout laughing afterwards. Listen at your own risk!

Fun on a bun

A grand time, albeit short lived. Really hope there is more to come. Funny and very well acted.

a lot of fun

This is a silly adventure story, it made me laugh while I was at work.

Super funny from beginning to end! And the performances were incredible as well. I absolutely loved Gemma Whelan’s performance specially

Reminded me of hitchhikers guide to the galaxy crossed with Red Dwarf. I hope more episodes come out soon!

There are scene-setting, sound effects, great characterizations, and some rather questionable dialogue, that come together in a fun romp through the post-apocalyptic aftermath of mankind's' nuclear hubris.

Bunker citizens, Veronica and Gary, are selected as the most fit to investigate the outside world, based on their qualifications of being naïve enough to volunteer. Once outside, they explore the remnants of a post-nuclear, war-torn wasteland.

Then it all rather falls apart as they meet the locals and are forced to make friends, make enemies, and make a mess of their trousers running from mutants, slavers, and dicey romantic interests. And, that just episode one.