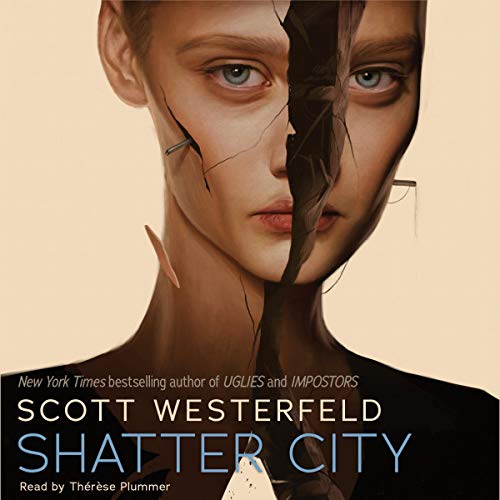 By: Scott Westerfeld
Narrated by: Thérèse Plummer
Try for £0.00

Even when you’re pretending to be someone else, you can’t escape who you are.

When the world sees Frey, they think they see her twin sister, Rafi. Frey was raised to be Rafi’s double, and now she’s taken on the role...without anyone else knowing.

Her goal? To destroy the forces that created her.

But with the world watching and a rebellion rising, Frey is forced into a detour. Suddenly, she is stranded on her own in Paz, a city where many of the citizens attempt to regulate their emotions through an interface on their arms. Paz is an easy place to get lost...and also an easy place to lose yourself.

As the city comes under a catastrophic attack, Frey must leave the shadows and enter the chaos of warfare - because there is no other way for her to find her missing sister...and have her revenge against her murderous father.

What listeners say about Shatter City

Still love the world-building! Plot felt a little brain-missing on its journey though. Shatter City left me reeling, but less so than it left Frey fizzling out of control. She really spiraled and I'm still not sure quite where she's at or who she is in the aftermath. Overall, this sequel felt like loose ends trying to be put away too neatly and too fast, allowing for huge reveals to happen in too short of a time. I feel like I know the characters even less than I did before.

The story was decent, entertaining enough. The affected intensity of the narrator was cheesy and distracting, as if she was constantly trying to imbue her words with an artificial steadfastness. It wasn't *bad* narration, but it did present a challenge to the suspension of disbelief.

This is silly. This story could have been told without putting it in Tallys world. I hope Scott didn't do that just to get fans of Uglies to read/listen.
I was hoping for more world building or changing but it mostly focuses on the main characters identity crisis.
It creates a story line and then disregards it and takes another one every other chapter without really building on it.
Kind of annoying

I absolutely cannot wait for the next book! the suspenses is killing me!! So Excited!

A rollercoaster of twists and turns! Secrets, revelations, and plenty of action. Can't wait for the next book!

loved it. great second book to series. can't wait until the 3rd one fomes out next year!

I would honestly recommend this book to every person I meet. Great read! I’ve been following the series for a long time and didn’t think it would live up to it. Beat my expectations thank so much!