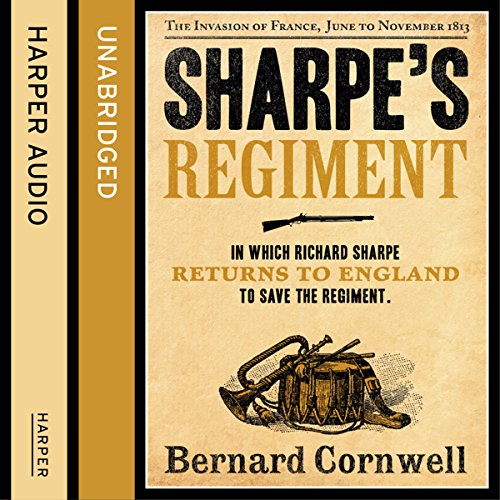 Sharpe's Regiment: The Invasion of France, June to November 1813

Sharpe's Regiment: The Invasion of France, June to November 1813

Richard Sharpe returns to England to save the regiment.Major Sharpe's men are in mortal danger - not from the French, but from the bureaucrats of Whitehall. Unless reinforcements can be brought from England, the regiment will be disbanded.

Determined not to see his regiment die, Sharpe returns to England and uncovers a nest of high-ranking traitors, any of whom could utterly destroy his career with a word. Sharpe is forced into the most desperate gamble of his life - and not even the influence of the Prince Regent may be enough to save him.

Soldier, hero, rogue - Sharpe is the man you always want on your side. Born in poverty, he joined the army to escape jail and climbed the ranks by sheer brutal courage. He knows no other family than the regiment of the 95th Rifles whose green jacket he proudly wears.

Please Note: The historical note is NOT included in this audiobook.

What listeners say about Sharpe's Regiment: The Invasion of France, June to November 1813

Formulaic but always a good story. Working through the series and enjoying them all .

all the sharpe books in this series are extremely well written and narrated. An absolute delight.

Farley is so good as sharpe et al. excellent story and well worth a credit

Another excellent novel, read expertly by Rupert Farley. If you are new to Sharpe then please don't start here; though if you are already a fan and don't mind reading them out of order then this one is really one of the best.

it is clear from the book and series that Sgt Harper is from Donegal so why does he not have a Donegal accent? Instead he is cast with a heavy Belfast accent. Is this just a lack of research ? Whatever.. it's off putting and annoying.

Some narration is static and boring. not so. Good understanding of the characters and story. excellent book as well, only to be expected from Cornwell. his depth of story is unsurpassed.

The story is great but the love interest with Jane is sooo wet!!! She’s a Wrong un

Sharpe at its best

Shape fights for his soldiers.

Sharpe puts his career on the line for his men, and nearly looses everything, but still gets the girl.

Remember watching these series as a kid and have subsequently read all the books several times. I love the audio format offered here, definitely adds a depth to the stories and a great way to overcome long stints sitting in traffic!