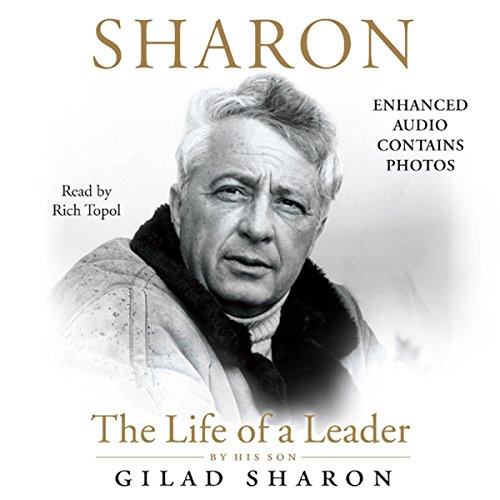 By: Gilad Sharon
Narrated by: Rich Topol
Try for £0.00

By the son and intimate confidant of former Israeli prime minister Ariel Sharon comes an unparalleled look at the life and work of one of the world’s most powerful leaders. “A multifaceted picture of an Israeli patriot, military leader, and family man” (Kirkus Reviews).

From his youth as a soldier to his service in government, Ariel Sharon has personified Israel’s unyielding drive for security. He revolutionized the Israel Defense Forces and established the anti-terror commando Unit 101. His leadership during the Six-Day and Yom Kippur wars made him a national hero and propelled him into the political arena. As terror grew throughout the Middle East at the end of the twentieth century, Sharon’s commitment to protect and bring peace to his people underscored his election to prime minister in 2001. But within months of taking office, the 9/11 attacks shook the Western world - thrusting the controversial statesman into the center of international affairs.

Sharon has walked a fine line between waging war on Israel’s enemies and accommodating demanding allies, a balancing act that is often subject to public misperception. As prime minister, he built a fence to separate Israel from the West Bank’s suicide bombers; he isolated Yasser Arafat in his Ramallah headquarters; and in a stunning and unprecedented move, he withdrew Israel’s settlements from Gaza. Throughout his life but especially as prime minister, Sharon kept a meticulous personal record of events and of the discussionshe had with world leaders, including George W. Bush, Tony Blair, Vladimir Putin, King Abdullah, Kofi Annan, Gerhard Schroeder, Jacques Chirac, Hosni Mubarak, Mahmoud Abbas, and others. But what the public knew of these interactions often differed dramatically from what went on in private.

Gilad Sharon, the prime minister’s youngest son and close confidant, has combed through his father’s vast archive - conversations, personal notes, diaries, daybooks, military directives, correspondence, and thousands of other documents - to offer a rare, intimate, and compelling look at one man’s evolution into one of the world’s most powerful and influential figures. Filled with news-making revelations, Sharon provides a rare view of global politics in action as well as a window onto the day-to-day life of a prime minister. A dazzling portrait of a legendary elder statesman and the nation he helped to build, here is a masterful biography and an illuminating analysis of modern Middle Eastern politics and the forces that have shaped this volatile region.

What listeners say about Sharon

Excellent Biography From an Unparalleled Source

I actually will listen to it again because Ariel Sharon's life paralleled the entire span of Israeli history and from a young age he became a major figure. He had fought in, commanded in, saved, lead or ordered every war in Israeli history up until his stroke. He is the father of the settlements and of the pullout from Gaza.

His son Gilad, the author, had unparalleled access since he had all of his father's meticulous notes and records, was among his father's most trusted advisors and was actually in the room for a great deal of the stories he recounts

It is an excellent book and due to the importance of Ariel Sharon to Israeli history and the closeness of the author to his subject, I would strongly recommend it, regardless of your level of knowledge about broader Israeli history.

Good Bio with no surprises

If you could sum up Sharon in three words, what would they be?

Would you be willing to try another book from Gilad Sharon? Why or why not?

maybe if I didn't have anything better to read

Good book, well voiced, Gives a good picture of sharon's public lifebut almost nothing on his private life. I pray for Sharon he has been in a coma for 6 years now.