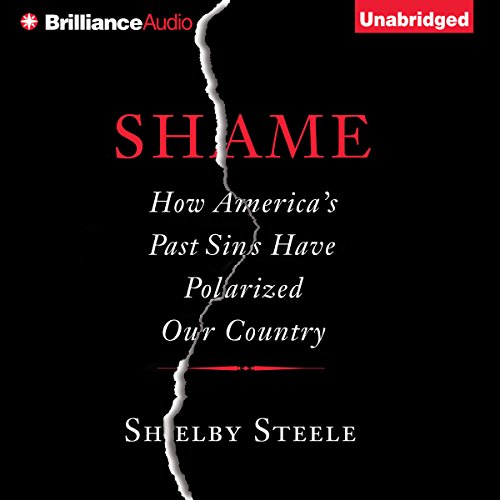 How America's Past Sins Have Polarized Our Country
By: Shelby Steele
Narrated by: Randall Bain
Length: 4 hrs and 47 mins
Categories: Non-fiction, Politics
3 out of 5 stars 3.0 (2 ratings)

A prominent conservative scholar traces the post-1960s divisions between the Right and the Left, taking aim at liberals' victimization of African Americans and their failure to offer a viable way forward for American society. The United States today is hopelessly polarized; the political Right and Left have hardened into rigid and deeply antagonistic camps, preventing any sort of progress. Amid the bickering and inertia, the promise of the 1960s--when we came together as a nation to fight for equality and universal justice--remains unfulfilled.

As Shelby Steele reveals in Shame, the roots of this impasse can be traced back to that decade of protest, when in the act of uncovering and dismantling our national hypocrisies--racism, sexism, militarism--liberals internalized the idea that there was something inauthentic, if not evil, in the American character. Since then, liberalism has been wholly concerned with redeeming modern America from the sins of the past and has derived its political legitimacy from the premise of a morally bankrupt America. The result has been a half century of well-intentioned but ineffective social programs, such as Affirmative Action. Steele reveals that not only have these programs failed, but they have in almost every case actively harmed America's minorities and poor. Ultimately, Steele argues, post-'60s liberalism has utterly failed to achieve its stated aim: true equality. Liberals, intending to atone for our past sins, have ironically perpetuated the exploitation of this country's least fortunate citizens.

It therefore falls to the Right to defend the American dream. Only by reviving our founding principles of individual freedom and merit-based competition can the fraught legacy of American history be redeemed, and only through freedom can we ever hope to reach equality.

A fascinating personal journey and a well crafted political history, all lazily folded into a book a Frenchman could read on his lunch break. It weaves together many strands very neatly to provide a lot of insight into the political currents of the last 70 years. I do think his ideas about feminism are a bit naive, but I guess that's not really his main concern.

This is an important book and its message needs to be taken seriously if we are to avoid the calamities that are brewing in American race relations in the modern era.

I would recommend Thomas Sowell's "Black Rednecks and White Liberals" as an excellent companion to this book.

Being a totally different fair and factually accurate book would help

What could Shelby Steele have done to make this a more enjoyable book for you?

Would you be willing to try another one of Randall Bain’s performances?

If you could play editor, what scene or scenes would you have cut from Shame?

All of it.he seems to dispute that sexism racism with its police oppression and environmental destruction are a massive problem in america

America the free great and bold anointted to be that last best hope.totally rewrites history to make liberalism some kind of totalitarianism and only neo-cons are right and the vietnam war was truly heroic and the destruction of a country was done to help them(lol)
Is seriously the most absurd book i have ever heard and what one may expect of a 12yr old

Loved it. The most insightful book on the modern political and social state of America I have ever read.

Desperately needed on our campuses.

Listening to Steele’s profound defense of development over mere inclusion and freedom over mere performance for guilty whites, I wished that the hordes of diversity and inclusion officers would lend an ear. Steele goes to depths beyond the imaginings of hucksters like Coates and Dyson and by so doing fails to provide liberal whites what they most desire: absolution for the sins of others.

EXCELLENT BOOK! I really wish my kids would read

Loved it! He puts into words the ideologies and thoughts I have had my entire adult life. I'm going to re-listen again tomorrow!

I loved it at learned, I wish I could hear his other books. I would recommend this book to everyone.

Steele lends a view of liberalism from the outside, a fresh take on the experience of straight black men in American institutions, and even a new means of understanding the backlash Democrats experienced from white America after the Civil Rights movement and Vietnam conflict. However, his well-heeled background pre-limits his ability to empathize with poorer black people. This, he may call an unwillingness to dissociate into relativism. The fear of this dissociation is misplaced, as it precludes him walking in other people's shoes. His coach, for example, likely felt ashamed and self-conscious at their interaction, but Steele could only see the power he held from his own point of view. Rather than appreciate the collective trauma of our country, Steele saw an opportunity for advantage. He fails to realize that the master's tools will not dismantle the master's house. Thus, his claim that white racism no longer poses a serious barrier to his black peers. True, there may not be a barrier to him and HIS peers, but to the poorer black community at large, he is not able to articulate their frustration because he has not experienced it first-hand. He will not take it onto himself, lest he dissociate like he did in the swimming pool when he realized he wouldn't swim competitively. He says it was a lack of passion and nothing else. If I may be so bold, I suspect it was the implication his exclusion at the party that a swimming career would be ever more difficult for him for his blackness. He denies this and even vilifies the term "blackness". But being only aware of propriety (what mother says, goes) and the flow of power in his young body, the lesson he took was one of cynicism. From then on, his has been a case of confirming what one believes by seeking the evidence that suits it. Being a black man and highly educated does help him to understand some of the machinations at work. Later chapters reflect on the dehumanization of racism. If only he could see the problem he tasted runs deeper and more insidiously than he could imagine.

Narrative from someone who lived it

This is an extremely informative perspective from someone who has lived the experience and gives valuable insight from a neutral or non political perspective. It explains very distinctly why we are where we are at in racial relations and how we got here.

Reasoned, thoughtful, well developed argument. His explanation of ideas, from the inside out, are clear.

I really enjoyed the book and the perspective of the author. it presents a fair representation of both viewpoints.

An amazingly insightful book. I will be listening to this again! Me. Steele has given me vocabulary for what I have been thinking for a long time.

The Message for Our Time

Steele has written a insightful and though provoking book. The messages presneted are relevant for all Americans wheterher they consider themselves liberal, conservative, independent or liberertarion. Steele's premise and arguments are founded on his experiences growing up during the important decades of the 60's and 70's. II too grew up during those decades but as a white from a small city in central Kansas. I had black classmates who I considered friends, but not so close as to share personal and social concerns and angsts. We are falling short of Dr. King's desire that we all be judged by our charchter not the color of our skin. My advice to all - Listen to this book!!