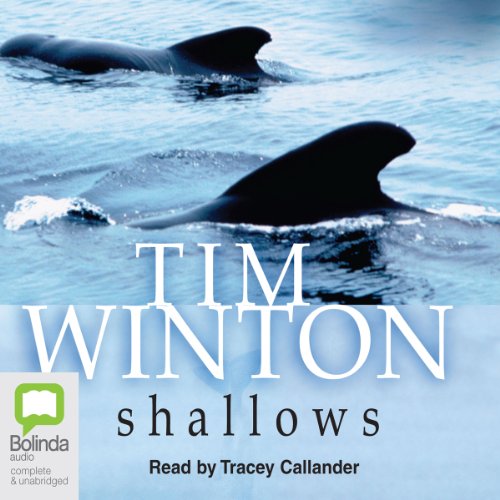 By: Tim Winton
Narrated by: Tracey Callander
Try for £0.00

Australian environmentalist, novelist, and short story writer Tim Winton has a mantle full of awards and has twice been nominated for the Man Booker prize. Tracey Callendar is a gentle-voiced actress known for television work on A Country Practice, Neighbours, and much else. Together they bring the listener Shallows, a tough, dark, elegiac novel set in and around the whaling culture in Western Australia in the 1980s, during a time when traditional whaling societies were butting up against modern protest. Rather than a screed, however, the novel is pensive and its characters conflicted. Callendar gives great voice to Queenie Coupar Cookson, just the sort of tough-minded female character that has helped earn Winton such justified praise.

Whales have always been the life-force of Angelus, a small town on the south coast of Western Australia. Their annual passing defines the rhythms of a life where little changes, and the town depends on their carcasses. So when the battle begins on the beaches outside the town, and when Queenie Cookson, a local girl, joins the Greenies to make amends for the crimes of her whaling ancestors, it can only throw everything into chaos.
©1993 Tim Winton; 2002 Bolinda Publishing Pty Ltd
Literary Fiction
Show More Show Less

What listeners say about Shallows