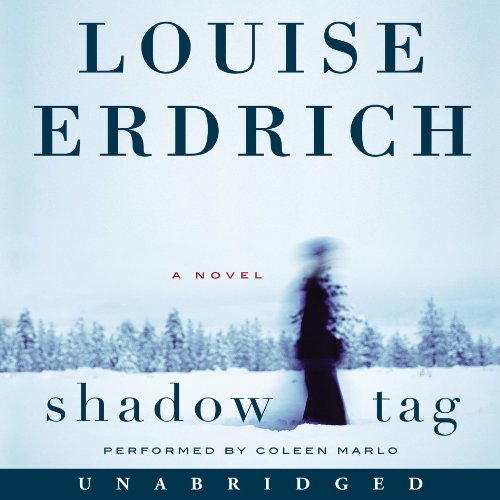 Senseless destruction is horrifying to watch. It makes sense, then, that this audiobook is horrifying to hear - horrifying yet irresistible. Uncomfortable scenes replay themselves as Irene's marriage to the brilliant, troubled artist Gil twists itself into a tortured stranglehold. The two go to extremes to make each other unhappy. Coleen Marlo nimbly captures each tormented character's voice and even portrays the suffering of the children with heartbreaking authenticity. The profound selfishness of the couple makes them difficult to like, but the beauty of Erdrich's writing and the precise neutrality of Marlo's narration make the family wreckage something that can't be ignored.

When Irene America discovers that her husband, Gil, has been reading her diary, she begins a secret Blue Notebook, stashed securely in a safe deposit box. There she records the truth about her life and her marriage, while turning her Red Diary - hidden where Gil will find it - into a manipulative farce.

Alternating between these two records, complemented by unflinching third-person narration, Shadow Tag is an eerily gripping listen. When the novel opens, Irene is resuming work on her doctoral thesis about George Catlin, the 19th-century painter whose Native American subjects often regarded his portraits with suspicious wonder. Gil, who gained notoriety as an artist through his emotionally revealing portraits of his wife - work that is adoring, sensual, and humiliating, even shocking - realizes that his fear of losing Irene may force him to create the defining work of his career.

Meanwhile, Irene and Gil fight to keep up appearances for their three children: 14-year-old genius Florian, who escapes his family’s unraveling with joints and a stolen bottle of wine; Riel, their only daughter, an 11-year-old feverishly planning to preserve her family, no matter what disaster strikes; and sweet kindergartener Stoney, who was born, his parents come to realize, at the beginning of the end. As her home increasingly becomes a place of violence and secrets, and she drifts into alcoholism, Irene moves to end her marriage. But her attachment to Gil is filled with shadowy need and delicious ironies.

In brilliantly controlled prose, Shadow Tag fearlessly explores the complex nature of love, the fluid boundaries of identity, and one family¹s struggle for survival and redemption.

What listeners say about Shadow Tag

Enjoyed it until the ending

Intriguing, provocative novel about the relationship between husband and wife, artist and muse, race and popular culture. The small details of domestic life were spot on and the descriptions of the "Artsy Crowd" reflected my experience of that world.

Unfortunately,the wrap-up at the end was a huge disappointment. It felt tacked on and took away from the power of the book.

Coleen Marlo did a fabulous job as Narrator. Her reading brought the daily world of this family to life without making it sound mundane. She also captured the powerful two main characters in her voice. No small feat as they are truly multi-layered, smart, and wily individuals.

A Love Stroy for Parents

The author spins a tale that is both gripping and scary, you watch two brilliant people with talent work to distroy each other.

The children the jewels of their lives are ignored by both. They are so wrapped up in their relationship that they don't realize what they are doing to the children.

This was a story of child abuse, both physical and mental. How the children came out of the story with some shred of normalcy was amazing. I loved the book and would highy recommend it.

This is the first book I've read by Erdrich. What an excellent use of language! She offers richly developed characters and language that beautifully ties them together. Her insights into a number of fields makes the book engaging. I highly recommend this read!

Well written but hard to read because of subject

Where does Shadow Tag rank among all the audiobooks you’ve listened to so far?

Not one of my favorites

Would you recommend Shadow Tag to your friends? Why or why not?

No, because it is a very depressing book.

The part where she goes out to save the husband she supposedly hates!!

First let me say that I usually love Louise Erdrich's novels and writing. I was so disappointed in this novel, however. The story was so very dark with emotional abuse so intense that it was often difficult to listen to. Obviously the author's skill in drawing me into the story was good, however, I found the lack of redemption in the story disturbing. Real life has enough of this. I also was disappointed that she missed the opportunity to expand and educate the reader about spousal abuse. The ending was to say the least unsatisfying and disappointing. When I think of The Last Report of the Miracles at Little No Horse for example, I cannot believe it is the same author. She must have been going through a very dark time, indeed.