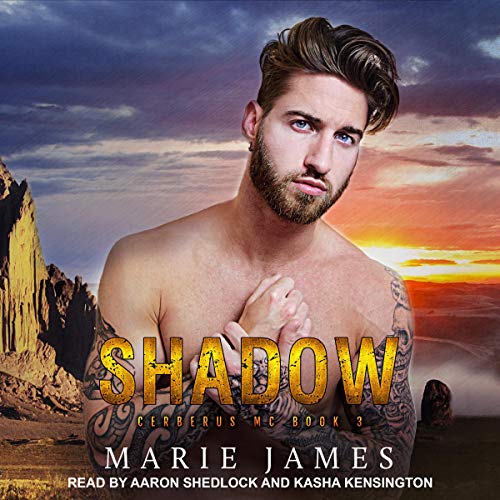 By: Marie James
Narrated by: Kasha Kensington,Aaron Shedlock
Try for £0.00

Morrison "Shadow" Griggs, VP of the Cerberus MC, is a force with which to be reckoned. Women fall at his feet, willing to do almost anything for a night with him.

Misty Bowen is the exception. She's young and impressionable, but with her religious upbringing, she's able to resist Shadow's advances...for a while, at least.

Never one to look back on past conquests, Shadow is surprised that he's intrigued by Misty, which only grows more when she seems to be done with him without a word. Being ghosted by a 21-year-old is not the norm where he's concerned, and the rejection doesn't sit right with him. Life goes on, however, until Misty shows up on the doorstep of the Cerberus MC clubhouse with a surprise that rocks his entire world off of its axis.

What listeners say about Shadow

I was pulled into this book right from the get go, which is where I stayed until I had read every single word that was written all the while I had it playing out in my head like a little mini movie.
There are twists, turns and surprises through out this book. Some of the surprises you may see coming and others you might not, some of the surprises are large, while others are small, but each and everyone has equal importance in the book and help to make the book the fantastic read that it is.
I went on a bit of an emotional rollercoaster ride with this book, I did cry, so if you are anything like me you might want to have your tissues available to be on the safe side. Each and every emotion that the characters go through can be felt and some will even pull on your heart strings. I went through the emotions with the characters. For me personally if I go through what the characters are going through, I usually enjoy the book better.
There was a time or two I wanted to reach into the book and smack a couple of the characters, but they redeemed themselves.
I loved every single word that was written about this book.
I highly recommend this book, this series and this author. If you haven't read anything by Marie James you are missing out on a wonderful experience.

Love the way she writes her books not to violent but with a little Spence. Aaron Sherlock is the best. He has the sexiest male voice ever It puts chills down my spine

I really like the story arch in general. But Misty, she was sooo unlikable, she made it impossible for me to enjoy the story. Which made me question what Shadow saw in her/why he was in love with her.
*SPOILER* - Misty LITERALLY created this situation and we (the readers) are just supposed to be like woe is you? No. Misty LIED to Shadow about being on birth control and then is completely unprepared for the pregnancy. What did she think was gonna happen?? *eye roll* She was honestly frustrating from the start.

I ended up liking this story. I wasnt too impressed with Shadow for a lot of the book. I wanted to smack him because he let his anger get the best if him but all worked out and was a good story. I've been waiting to listen to Dominic's story again.

holy crap on a cracker!

talk about keeping you on the end till the very end!!!