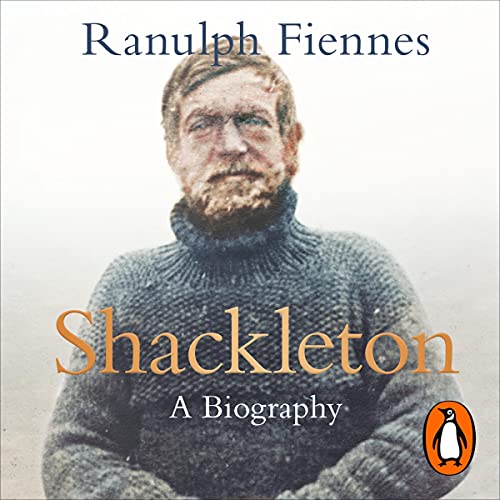 By: Ranulph Fiennes
Narrated by: Jonathan Keeble
Try for £0.00

To write about Hell, it helps if you have been there.

In 1915, Sir Ernest Shackleton's attempt to traverse the Antarctic was cut short when his ship, Endurance, became trapped in ice.

The disaster left Shackleton and his men alone at the frozen South Pole, fighting for their lives.

Their survival and escape is the most famous adventure in history.

Shackleton is an engaging new account of the adventurer, his life and his incredible leadership under the most extreme of circumstances.

Written by polar adventurer Sir Ranulph Fiennes, who followed in Shackleton's footsteps, he brings his own unique insights to bear on these infamous expeditions. Shackleton is both re-appraisal and a valediction, separating the man from the myth he has become.

What listeners say about Shackleton

I had a passing interest in Arctic explorers and of read books on Shackleton's endurance and so on, so is very pleased to learn that there was finally going to be a definitive biography by someone who was walked in his footsteps.
The book as you would expect is very comprehensive and goes chronologically through Shackleton's life. It also sets out to debunk and challenge preconceived myths of the time about this man and also particularly about the rivalry between Shackleton and Robert Scott. The author makes no bones about the things that he believes are completely inaccurate from previous biographies and this is backed up by extensive research and also the author's own experience in Antarctica.

I was completely gripped by the expeditions that Shackleton undertook and also the extraordinary lengths he went to, to preserve the life of his crew at the expense of reaching his goal.

The book does not shy away from the darkness of Shackleton the sacrifices that his wife made to allow her husband to try and fulfil his dreams relationships with other women and so on.

This is not the tracked from the lasting legacy Shackleton and his accomplishments and indeed, the book does go some way to discuss the legacy after death and the fact that it took many years for Shackleton's name to be given such credence as it is today.

The narration is absolutely superb and I was gripped from the very first chapter. If you think you know Shackleton read this book think your find that you don't and you may be surprised and excited about what you find out! An interesting side note is there are so many things that you can learn about Shackleton's approach to life. I will now be trying to lead by example. This man is a true hero and the book was a privilege to read.

Really enjoyed this book and devoured it in two days. The story from a bygone age of exploration into the cold plus the animosity between Scott and Shackleton was presented in an unbiased way. I’ve read some of the authors books before and enjoyed those too. Well narrated as usual by Mr Keeble.

l loved this book and it's a far cry from my normal reading matter. A real cliff hanger, literally in parts, it also taught me a lot, well written and well read.

up there with best audible I've listened to

loved it, story, performance and learning more about a great man from history from someone that's experienced what he went through on his expeditions.. 5 stars all the way.

I really enjoyed Sir Ranulph Fiennes’s ‘Scott’, so when I saw ‘Shackleton’ had been published I knew it would be good. It wasn’t good - it was excellent. Fiennes’s is in the pretty much unique position of being able to empathise and related to the highs and lows of Antarctic travel because he has done it himself. He has literally walked the proverbial mile in Shackleton’s (and Scott’s) shoes. His perspective therefore lends
a new way to interpret Shackleton’s questionable decision making, and he is able to review Shackleton’s adventures in an objective way. The narrator, by the way, is brilliant - the way he lends gravitas to the serious accounts but then injects a real sense of peril through his tone of voice into the dangerous parts made this book all the more enjoyable. I recommend it.

This is a great addition to the Shackelton story such as the phenomenal Endurance by Alfred Lansing.
Fiennes greatly adds to the story by interweaving his own experiences on the ice. In many respects the story before the Endurance expedition was better than the end of the book especially his complicated relationship with Scott.
Narration was superb, a really great listen. If you enjoyed Endurance then this is a must for your Audible library.

enjoyable listen all the way thru. respectful of the differences and perhaps battles between Scott and Shackleton. Well worth a dip