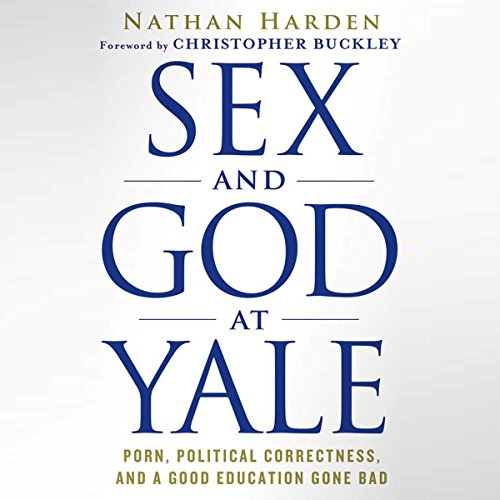 Sex and God at Yale

Sex and God at Yale

To glimpse America’s future, one needs to look no further than its college campuses. Of those institutions, none holds more clout than Yale University, the hallowed “cradle of presidents”. In Sex and God at Yale, recent graduate Nathan Harden undresses perversity among the Ivy and ideology gone wild as the upper echelon of academia is mired in nothing less than a full-fledged moral crisis.

Three generations ago, William F. Buckley’s classic God and Man at Yale, a critique of enforced liberalism at his alma mater, became a rallying cry of the conservative movement. Today Harden reveals how a loss of purpose, borne of extreme agendas and single-minded political correctness shielded under labels of “academic freedom”, subverts the goals of higher education.

Harden’s provocative narrative highlights the implications of the controversial Sex Week on campus and the social elitism of the Yale “naked party” phenomenon. Going beyond mere sexual expose, Sex and God at Yale pulls the sheets off of institutional licentiousness and examines how his alma mater got to a point where:

Much more than this, Harden examines the inherent contradictions in the partisan politicizing of higher education. What does it say when Yale seeks to distance itself from its Divinity School roots while at the same time it hires a Muslim imam with no academic credentials to instruct students? When the same school that would not allow ROTC on its campus for decades invites a former Taliban spokesperson to study at the university? Or employs a professor who praised Hamas terrorists?

As Harden asks: What sort of moral leadership can we expect from Yale’s presidents and CEOs of tomorrow? Will the so-called “abortion artist” be leading the National Endowment for the Arts in 20 years? Will a future president be practicing moves he or she learned during Sex Week in the closet of the Oval Office? If tyrants tell little girls they aren’t allowed to go to school, will an Ivy-educated Taliban emissary be the one to deliver the message?

Sex and God at Yale is required reading for the parent of any college-bound student - and for anyone concerned about the direction of higher education in America and the implications it has for young students today and the leaders of tomorrow.

"A fierce expose of the sexual culture of one of America’s great universities." (David Frum, contributor for CNN, Newsweek, and The Daily Beast; author of The Right Man and The End to Evil)
"This startling dispatch from a talented young writer will shame Yale, if the Yale he describes is even capable of feeling shame. Nathan Harden's memoir is a 21st-century sequel to Bill Buckley's God and Man at Yale and its lesson is simple: Don't send your daughters to New Haven." (John J. Miller, National Review national correspondent, Wall Street Journal contributor, author of The Big Scrum and Our Oldest Enemy)
"Only a college administrator could love the sexual playgrounds doubling as America's elite colleges. And only Nathan Harden can give our priapic ivory tower the softoff it deserves. His insight is penetrating; his wit hits the spot; he lands a thousand blows. Most erotic commentators are lucky to make it to third base. With Sex and God at Yale, Harden scores a walk-off grand slam." (James Poulos, Daily Caller columnist and Forbes contributor)

What listeners say about Sex and God at Yale

I wanted to like this book; I really did. It made me think, I liked the narration, and found some of the anecdotes entertaining, but I felt as if this book serves as a delayed “screw you” to the Yale administrators for denying him acceptance to the school twice before admitting him. I found the non-linear way in which the book was read (written) to be somewhat confusing at times, almost unorganized. I also found his tone to be somewhat glib. Yes, the juxtaposition of intelligent, ambitious young minds and the lewd distributors and stars of pornography is interesting, but certainly nothing novel or earth-shattering. And sexual exploration and confusion is not unique to the co-eds of Yale University. Many of his thoughts on the hookup culture and its fine line with feminism and the sexual revolution are thought-provoking; I only wish that they had been developed and better-researched. Again, though, I posit this internal struggle that women undergo throughout life is not Yale (or youth) specific. I think Harden’s book would have been more meaningful had he not focused on Sex Week, or if he had suggestions on how to stage a return to feminism of yore. To be blunt, a few days is not a true and powerful sampling of an entire undergraduate experience. If the naked “professors,” sex instructions, or porn star discussion panels offended him, he could have left the “lecture” or the school. So, it seems that while Harden balks at Yale’s accepting funds from sex toy conglomerates, he similarly has no problem accepting Yale’s subsidizing his studying in Italy, or accepting the brand-name diploma he irreverently displays in his $15 Walmart frame. It seems he can bought, too.

Have you listened to any of Scott Aiello’s other performances before? How does this one compare?

I thought the narrator was fine and has a very pleasant voice, but the women had the same timid and shy voice, which may have been intentional. I’m also not sure why he gave Nick Carraway a British accent, when he is from Minnesota. Audible should also note that the introduction names Jack Hume (sp?) as the narrator, whereas elsewhere audible indicates the narrator as Scott Aiello. Not sure if you want to correct this.