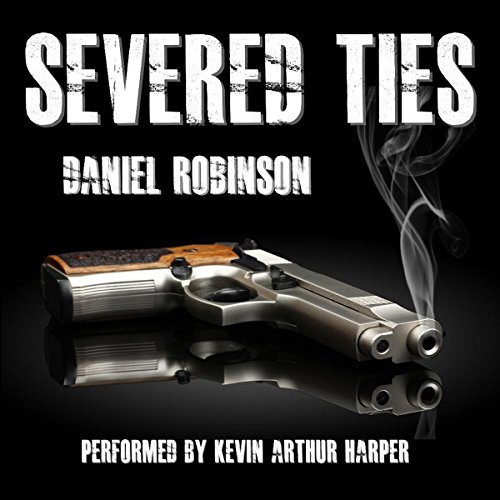 It was a normal and uneventful day at the book signing until the Frenchman arrived. This would be the writer’s first encounter with the man who would eventually target Cooper and those close to him in his deadly quest for revenge.

It is Cooper’s own novel that the murderer uses as his killing guide. But Cooper realizes this far too late, as body number one is soon discovered.

What listeners say about Severed Ties

Hope this becomes a series

Nick Cooper a cop turned author of a detective series that’s based somewhat on his former cases.

He is at a signing at a bookshop with his Agent/friend and a man with a French accent has a word with him, but as he leaves he forms a gun with his hand, then Nick’s friends start getting murdered and the killer is leaving weird poems for Nick.
It appears that the killer is following the plot of one of Nick's books.
We are given some background glimpses into Nick’s life from beat cop.. and how he progressed through the ranks.

This story involves a crime writer who finds his book is being used as the blueprint for committing murders. He must become personally involved in solving these crimes. Because of his past as a policeman he becomes the subject of reprisal by someone who he had arrested. It seems this individual suffered consequences and has determined that the author should suffer like punishment.

The story was excellent and the narration was great. I enjoyed it a lot.

This book was provided free of charge with the expectation of a fair review.

I loved the most of the characters, but that ending was the best. I’m not going to give away any spoilers because I don't want to ruin it for anyone else, but everything came together in the end rather nicely.

The narrator held my attention all the way through with his ability to bring the characters to life and he kept me on the edge of my seat. I laughed, I cried but I couldn’t put it down.

I’m this is most defiantly the book for you if you love to listen or read a high pace action book.

I’m looking forward, and I can’t wait, to see more books from this author in the near future.

This book hooked me in the first few chapters! I literally couldn't stop listening....finished it in two days. The story line is excellent, very graphic and the narrator made me feel like I was right there for every juicy minute. If you enjoy a great suspense thriller..."Severed Ties" will not disappoint. My hats off to Author Daniel Robinson and Narrator Kevin Harper....looking forward to more from this duo.

Looking for the next Nick Cooper story!

I enjoyed this book from start to finish. I didn't understand the need to have so many stories, good that they were, within the story, but, the author did a really good job of bringing it all together. However, I had the bad guy pegged for who he was pretty quick once the clues started coming in.
I listened to the audio version of this book and Kevin Harper does a really good job of the narration, characters and all around story telling.
I recommend this to those that enjoy a good 'who done it'

It all begins at a book signing...or does it? The 1st chapter was a bit slow, but if you stick with it...holy he!!, you won’t be able to stop! Nick is a former cop, now author of a popular detective series that’s based loosely on former cases. At this particular signing, a strange man, with a French accent, stops by and gives off weird vibes...next thing you know, Nick’s friends are being murdered and the killer is leaving poems for Nick. In between, we are given some background of Nick’s life from beat cop...when he arrested a hard-to-prosecute crook...to present day. Stick with this story and you won’t be disappointed.
The narrator did a great job keeping you engaged.
I voluntarily accepted a complimentary copy of this book in exchange for an unbiased review.

Unfortunately due to the twisted nature of the villain and their plans the aftermath that they leave in their wake is descriptively gruesome. This book is very much like a modern noir. Thus, like any true noir, there is a long period of background and set up to show the audience who the main players are and how they got to the main event.

The narrator does good with differentiation even between same gender characters. However his voice tends to get softer as the narration progresses resulting in the need to back up and hike up the volume often.

Again like any true noir detective story if the listener pays close attention, they can see early on how the pieces fit. Yet even careful attention does not mean that unexpected twists can't throw out something that you didn't see coming. Further, whether the ending is a happy, sad, or bitter sweet one depends on how the listener chooses to keep score.

This book was awesome!! Really loved it. If you like great fast-paced thrillers, this one will knock your socks off. Great stuff! Loved the story/plot, characters, all of it. No complaints at all, very well done and I was on the edge of my seat!
Narrator was excellent, did a fantastic job, really brought the story and characters to life. Hope more are coming! Loved it.
I was given this free review copy audiobook at my request and have voluntarily left this review.

could not put down...great ending...if you love a who-done-it this is a good one.narrator was perfect