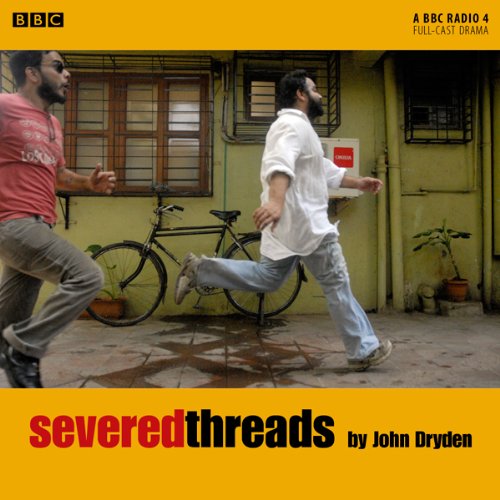 Three lives on three continents connected by one event… A young British schoolboy obsessed with school massacres, a radio journalist in India on the trail of a scoop for the BBC, and the boss of an American church-owned clothing firm are the threads that run through this intricate, suspenseful three-part thriller from award-winning writer-director John Dryden.

At first the three lives seem totally unconnected, but as the threads unravel they become tangled in a shocking heap of child labour, abuse and murder. A unique and compelling thriller, recorded on location in the USA, India, and the UK. Written and directed by John Dryden. A Goldhawk Essential Production.

What listeners say about Severed Threads


Enjoyed listening to John Dryden’s ‘Pandemic’ earlier this week that I needed another dose of his genius. And this again is a fantastic drama, a 3-thread story that meets at the end.

There are really lots of incredible audio plays on Audible, I just wished it was easier finding them. For example this was uploaded March 2012, and since then only one review has been left (Feb’15).

It may not be the newest, but it certainly is a fabulous 2hr audio drama. If only more people could find it, they too might agree.

By now we are all familiar with the exploitation of child labour by major clothing companies in the developping world. This series of plays relates the impact of this industry on two families one in England and one in the United States. They explore the emotional impact of this industry and expose the hypocracy of those involved in the trade. The message of hope comes at the end through the mouthpiece of a twelve year old boy. This is an excellent production and a really exciting audible listen. Not to be missed.

This drama makes excellent use of the audio medium. I really enjoyed it.
The action takes place in three locations, one in the past, one present, one future (sort of). The drama unfolds like someone gradually filling in a painting - with the listener left to make connections.
The acting is uncannily realistic and the story plausible, if disturbing.
This the third John Dryden drama I’ve heard. I recommend all the others on Audible, and if you like them look out for “Passenger List” on the radio and podcasts, which I think is his best yet.

"the cost of living"

very powerful. the greed of society and cultural acceptance of mutilating and exploiting children. The ethics or is it ambition of one man attempting to expose the lengths of a corrupt society will go to to meet demands of the western world. Exposing the attitudes that conflict with modern society. The extent of which families will go to, sacrificing a child, to meet basic means of survival. The cost of living, is a limb, a life or a child to inhumane conditions?