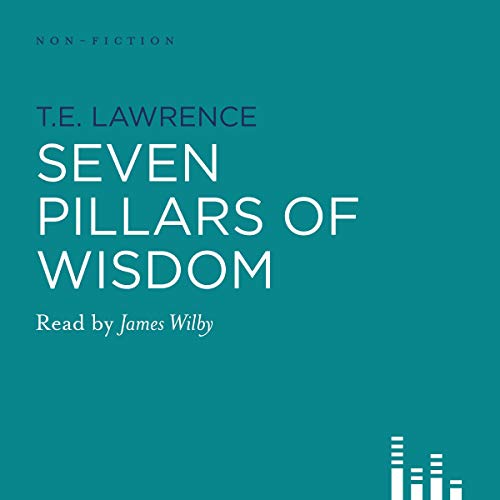 Lawrence of Arabia's seminal work charts his time with British Military Intelligence in the Levantine territories, during the wars with the Turks. The manuscript is candid and action-packed (and was entirely re-written after Lawrence lost the original manuscript whilst changing trains).
©2007 CSA Word (P)2007 CSA Word
Historical
Show More Show Less

"This is a masterful recording of the memoirs of the man better known as Lawrence of Arabia." ( Financial Times)

"At 350,000 words it is a long haul for modern listeners; this abridgement keeps the swing and zing of Lawrence's prose and James Wilby narrates with the fierce engagement that the book deserves.." (The Times)

What listeners say about Seven Pillars of Wisdom

When you hear this book I think that it should be compulsory reading for all the people who deal in the middle east,as far as I can make out it could have been wrote yesterday. I have lived and worked in the middle east and I enjoyed every minute but it has not changed a jot by the reading of this book

This is one of the best-known British works of the first half of the 20th century. It conveys well the mystique of the man, which continues to fascinate, and his descriptions of the desert landscape and his metaphysical identification with the Arab culture and people radiate from the text. But it wanders, it is highly egocentric, and it's not really to be relied on as an historical account. It nonetheless is a marvellous experience, and perfect as an audio book where Lawrence's world can be dreamed of with eyes closed.

One of the great books spoilted

I have read this book and think it was great, and was looking foward to listening to it, but to me, it was ruined by the same music playing all the way through. A waste of my money a waste of my time I have downloaded a lot from audible but this is the only one I do not like.. As I said one of the great books spoiled.

Of all the audio books that I?ve purchased during the past couple of years this one has to rate as one of the poorest. It was a relief to finish it and a test of endurance for the majority of the listen. Now, the narration isn?t too bad and perfectly acceptable. For James Wilby?s efforts I?d probably rate him a 3 or 4 stars. However, the prose itself was fragmented, lacking context and meaning, and too much of a relaying of events without the bigger picture to form the backdrop. Fair enough, it?s an abridged version and some books can even benefit from such a format, but I do think that this isn?t one of them. True, it does have some interesting highlights and there?s just about enough to keep the listener going ? about 3 stars for content. Then, there?s that interminable ?Swan? by Saint-Saens, the music between each episode and part, repeated time and again. Extremely irritating, annoying and totally unnecessary. It is this very poor production (which itself merits a negative rating if such were possible) that renders this audio book just 1 star in the final reckoning. I mean, at one point in the book there was a full 3 minutes plus of musical interlude. WHY? You have been warned?hear comes that ?swan? again?arrrggghhh!!!

Excellent apart from the music

Excellent book, excellent narration.
However, the whole was greatly spoiled by the repetition of the same piece of music every few pages (must be at least 60 times). After hearing this you will never want to hear Saint-Saens 'Swan' ever again!

I enjoyed this book and recommend this purchase. Anyone with an interest in history or who is working / living in the Middle East should consider buying it.

The narration was first class and takes you to the wadi's, the heat and the horror of the war in the middle east during WW1. The book itself is touching and fascinating and gives you an insight into male Arab ways, I only wish I had read this before I lived in the Middle east.

Where does Seven Pillars of Wisdom rank among all the audiobooks you’ve listened to so far?

I would say that this story ranks high but the music insertions at the end of every chapter were a pain!

Which character – as performed by James Wilby – was your favorite?

James Wilby did a fine job reading this.

No. It was a good car companion though

Whoever published this inserted a long music que (I think it is from Massenet -Thais?) Anyway, the chapters of this book are very short (5 -10 min at most) and at every chapter there is this minutes long music que!! And you can't get past it. It REALLY took away from the experience. I can see one at the beginning and end, but EVERY chapter? Sometimes the music would do a long fade in under the last words of a chapter and was totally incongruous with what was being said. If they publish this again, please take the music out between chapters. Other than that, it was a great true story of one of the most intriguing historical figures of the 20th century.

While the story was interesting and the reading wonderful theistic between each chapter was maddening.

I would suggest the written format for this story.

Decent, but not great

This book was fairly interesting, but I did find myself daydreaming and missing parts at times.. It is definitely an older writing style, and doesn't grab my attention as much as some modern works do. The main reason I'm writing a review however is because I am displeased with the amount of repetitive music that is played during the audio book. At the end of some chapters there is close to 3 minutes of music! I don't see any point to this, and I would prefer that it goes right into the next chapter after a short pause (like most books). The narration was fairly good, and it's a very interesting war story. A little too much homosexuality for my taste, but that's how the book is. It wasn't too over-done, just more than I would have preferred.

I bought this book because of my interest in the Middle East; I thought it would be interesting to get the perspective of an odd character like Lawrence. I was surprised, though, to find that his writing was actually quite good. The narrative is a bit confusing at times, but the writing itself and the sensations he conveys are definitely worth the download.

The Film "Lawrence of Arabia" was clearly based on this memoir. There were some gratuitous departures of the film from the book. They were all mistakes, the book's account is better. Lawrence had a unique experience and was a brilliant storyteller. He was clearly a bit racist, but it was a different time. He was enthralled with the Arabs, but largely contemptuous of the Turks.