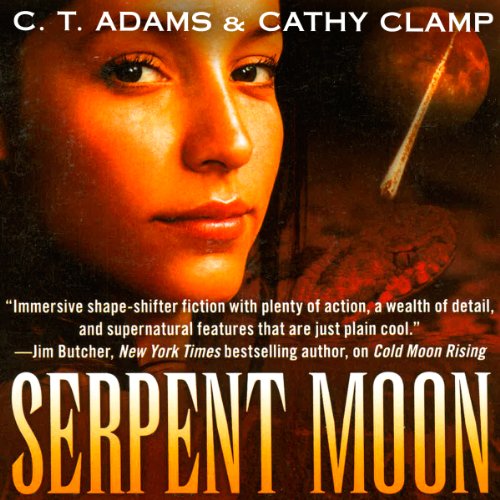 The eighth book of the enthralling Sazi series, Serpent Moon picks up with Holly Sanchez and Eric Thompson. Filled with thrilling plot twists and steamy romantic encounters, Serpent Moon ranks amongst the best books of C. T. Adams and Kathy Clamps' Sazi chronicles. Adam Epstein reprises his role as voice performer with aplomb. It's incredible the way he is able to one moment convey the macho instinct of a werewolf and the next convey intimate feelings of loss and loneliness. Exciting and humorous, Serpent Moon is not to be missed.

Eric Thompson’s wolf howl can ruin electronics and send aircraft tumbling from the sky. Considered dangerous even by his fellow Sazi, Eric has become a lone wolf, living in self-imposed isolation. Yet when the very foundations of Sazi life come under attack, Eric knows he must defend his fellow shape shifters at any cost.

Attacked by a band of vicious Sazi, Holly Sanchez should have died. Instead, she survives, emerging as a powerful Sazi healer. Sent to return Eric to the Sazi world he rejected, Holly finds herself by his side as the lone wolf tracks the monster that is killing the Sazi. Holly soon realizes she must make a choice - between a Sazi life with Eric, and life as a “normal” human being. But first, she must survive long enough to make that choice - and she must save her people, and the world, from evil.

What listeners say about Serpent Moon

whoever chose the narrator and directed him, didn't make a great choice. he's blah!