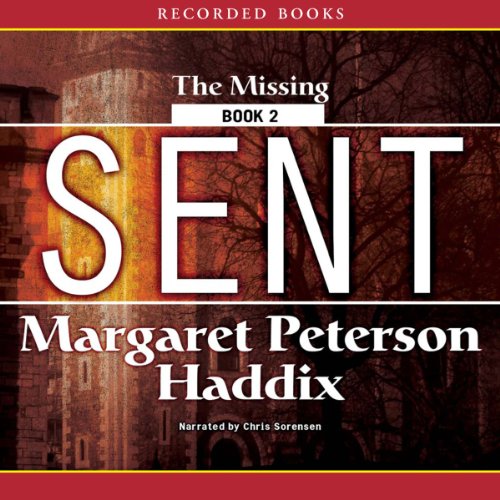 By: Margaret Peterson Haddix
Narrated by: Chris Sorensen
Try for £0.00

Critically acclaimed author Margaret Peterson Haddix continues her best-selling Missing series with Sent. Just as best friends Chip and Jonah discover they're actually children kidnapped from history, they get sent back to their proper time period. Now in the 15th century, Jonah realizes he's Edward V, the king of England, and Chip is his younger brother Richard, the Duke of York. Both boys know they need to find a way home fast, because they know their history - Edward and Richard were murdered.

What listeners say about Sent

Suspenseful and a great book for youth to read.

I really enjoyed this book. I have 4th grade students listening to this series. They are really enjoying it and are engaged in discussion. They can relate to the characters and their feelings.

This is a tough pick- I really like Katerine but also like Jonah and Chip. The kids all have their own neat personallities that add to the story.

Where Jonah and Katerine are invisible and talk to the king.

The premise of the series is intriguing. I work as a teacher and Scholastic has worked hard to promote the series through school book fairs and book orders. After years of seeing the titles, I broke down and began to read the series. I appreciate the author's idea, as well as their obvious interest in history. However, I do not find the texts to be very intellectually stimulating.

While the content of the novel (or the entire series) is perfect for fifth graders -- the historical figures come directly out of fifth grade Social Studies textbooks -- the level of intellectual stimulation is fairly low. As a fifth grade teacher, I look for books that are going to stretch and grow my students are readers (and writers).

I look for characters that are developed across the chapters or books, characters that are not just one way, characters that change and evolve. The characters within these novels are fairly stagnant, experiencing seemingly very superficial evolutions despite experiencing rather dramatic events. I look for writing that offers itself as a coach. Haddix' writing style is rather simplistic, and does not offer many lessons. I look for books that require engagement across the pages, books that if you space out will no longer make sense. With this series, I have easily been able to check out for sometimes as long as ten minutes, and still be able to fully understand the plot.

Overall, I find the idea of the series fantastic. However, the execution is poor. I would recommend this as a challenge (Social Studies content-wise) to fourth graders or a pleasure read for fifth or sixth graders. I would not recommend it at all to adults, unless they were reading alongside their 9 or 10-year-old's.

A decent cliffhanger. The next books in the series are not worth the investment, however. The only question readers seek at the end is who Jonah was in history. This question, as of the most recently released book, has not yet been answered. I've decided, after having read four of the books within the series, to wait until the book is released and the internet answers that question.

The narrator was okay. He overdid it when it came to voicing Catherine, making her sound like Disney child-actor at times.

Did Sent inspire you to do anything?

It made me think about how I would re-write the plot. Again, it is a really interesting idea, but was very poorly executed.

Not worth the money. If your child really wants to read it, have them check it out from the library. Most of my students have abandoned the series part way through the second book.

Where does Sent rank among all the audiobooks you’ve listened to so far?

Sent is a great tween book. Before you read it you have to read Found. My son has never been a reader but since he has found this series by Margaret Peterson Haddix he is hooked. Chris did a great job telling the story!

The mystery of the story is the best and definitely kept my 10 year old holding on to every word.

What aspect of Chris Sorensen’s performance would you have changed?

Overall, it was a pretty good book. The characters has some depth, and the plot was good.

This was a compelling follow-up to the first book, Found. Some slow parts, but fun.

This book was not as intriguing as the first book to me. There were some interesting parts to it but I think the first book really had more mystery and kept you on the edge of your seat eager to know what is going to happen next. At some parts of this book are a bit confusing to follow, this book takes place in history in the 1400's, but some of the different events that take place throw you for a loop. I really didn't get the whole point of the book, I know the main point of the series is that 26 kids found out they are important people from history and they were sent to the future to be saved, but the whole point of this book and going back in time didn't make sense to me. I didn't really see anything new to the plot or the story. It is all still the same as in book one, just the adventure is in a different time and only focus on 2 kids history instead of 26. I still don't know if the kids where supposed to be dead or alive, and if history was even changed. It seems like each book from here on out will be going back to help out all these different kids and making sure that history is changed and they are not killed.

Sent is an amazing book