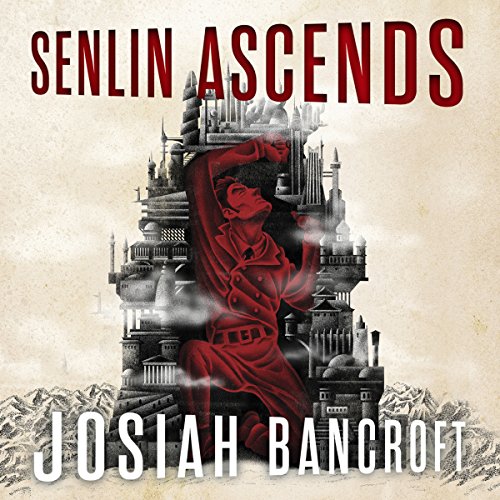 By: Josiah Bancroft
Narrated by: John Banks
Try for £0.00

Discover the extraordinary debut that has got everyone talking.

Mild-mannered headmaster, Thomas Senlin prefers his adventures to be safely contained within the pages of a book. So when he loses his new bride shortly after embarking on the honeymoon of their dreams, he is ill-prepared for the trouble that follows.

To find her, Senlin must enter the Tower of Babel - a world of geniuses and tyrants, of menace and wonder, of unusual animals and mysterious machines. And if he hopes to ever see his wife again, he will have to do more than just survive...this quiet man of letters must become a man of action.

"One of my favourite books of all time." (Mark Lawrence)

"An extraordinary debut that is well worthy of the hype. A beautifully written, highly engaging page-turning masterpiece." (Fantasy Book Review)

"Thomas Senlin is the most unlikely yet likeable hero since a certain hobbit rushed out of Bag End leaving his second breakfast half-finished and entirely unwashed-up." (Fantasy Faction)

What listeners say about Senlin Ascends

I started Senlin Ascends yesterday, I was having a bad day, one of those ones where nothing seems to go the way you want it to. By chapter 3 I realised my day wasn’t actually that bad. Thomas Senlin, on the other hand, was having a really bad day… several actually, but he’s really good at dealing with everything life throws at him.

Thomas Senlin is a mild-mannered headmaster from a small town out in the middle of nowhere. Inspired by the legends and books, Senlin and his newlywed wife, Marya, travel to the world’s greatest marvel, a tower stretching into the sky with unnumbered ringdoms stacked one on the other like the layers of a cake, the Tower of Babel. Within the first hour of their arrival, Senlin loses his wife in the chaotic ever evolving throng of people and stores in and around the tower.

Now at this stage, you’re probably thinking, how could Bancroft possibly turn Senlin losing his wife into a nice, interesting book, it shouldn’t be that hard to find each other again. Well, imagine you’re in New York City in rush hour, there are people everywhere, and it’s easy to get separated. Then imagine all the buildings look similar and regularly move around. Then take this idea of the crowded, ever-evolving, chaotic mess of this imaginary NYC, multiply it, and start stacking each city on top of each other. Each layer slightly different from the one before, posing new and different challenges before you can pass to the next layer, people with their own agendas who want to rob you and make you do things you don’t want to do and then you have something that looks like an easy version of the situation Senlin finds himself in.

The Tower of Babel is an immensely interesting setting for this novel. Each layer is fundamentally different from the layer below, each specialising in something different, and Bancroft creates his own miniature world in each different layer. The book is split into three distinct sections (they’re really good indications on where to have a break) each occurring in a different part of the tower, and we get to spend a good amount of time in each of these very different, but also similar worlds.

Bancroft does an excellent job of describing this fascinating steampunk world he has created. He also has an amazing way of illustrating scenes through some very unique metaphors, which I really loved.

As you can probably guess, Senlin is the main character of the book. He’s a mild-mannered, thoughtful person, as you’d expect for a headmaster, and not at all used to the unfamiliar scenarios he finds himself in. Thus begins the epic development of Thomas Senlin, a seemingly ordinary guy, thrown headfirst into an extraordinary world. I admire Senlin greatly; he takes everything in his stride and just keeps on going regardless of what the world throws at him.

My favourite description of Senlin comes fairly early on in the book, and is probably one a lot of readers can identify with:

Senlin loved nothing more in the world than a warm hearth to set his feet upon and a good book to pour his whole mind into. While an evening storm rattled the shutters and a glass of port wine warmed in his hand, Senlin would read into the wee hours of the night.

Other characters come and go throughout the series as Senlin moves about the tower, but we get deep insights into the lives and driving forces behind these characters. Overall, Bancroft does a fantastic job of thoroughly developing his characters.

The plot can be summarised fairly succinctly, Senlin wants to climb the tower and find his wife. The tower does not want to be climbed. Conflict ensues.

In reality, it’s a bit more complex than that, Senlin’s character development really shines in those moments of conflict, and it becomes evident how the circumstances and events change him.

As I said earlier, the story is broken down into 3 smaller parts, and Josiah does a fantastic job of bringing the events in each part together for the conclusion of the book.

I really loved this book. It’s the first steampunk book I’ve ever read, and I absolutely adored it. The world is amazing, the characters are well thought out and interesting, and it wraps these aspects together with a great plot, and some really good prose.

If I haven’t convinced you of how good this book is, Josiah was originally self-published, and Orbit has seen how good his work is and offered him a publishing deal. The narration of this book is amazing. John Banks does a fantastic job of making Senlin real, and the voice fits him perfectly.

Senlin Snags Me By The End!

It's not often I feel conflicted about what rating to give a book but this is definitely an example. Senlin Ascends really is a pure fantasy, almost a Fantasia in the sense that there is no attempt to do any kind of vaguely logical world-building. Instead a mild mannered small school headteacher is plunged into a mystical tower which is idealised as the height of human achievement when in reality it's anything but. Senlin is driven to explore the levels of this enormous structure, each contains its own almost self-contained society with absolutely no suggestion of anything about how they interact paying more than lip service to logic. It's almost like an extended fable.

This of course gives the writer enormous ease and freedom and Bancroft doesn't hold back filling each of the levels or "Ringdoms" with a colourful army of larger than life characters and crazy inventions such as the "Beer-me-up" I think it was. It made me laugh at the thought of it anyway - an end to climate change? The narration by John Banks suits the tone of the book very well. He delivered the author's at times incredibly clever and literate prose in just the right manner.

To me though the whole thing only really took off in the last three to four hours when a lot of threads came together and the story and its hero really seemed to emerge as a strong character. For this reason and the fact that this will drive you insane if you need any level of logic to apply to your fantasy I'm sticking at four stars for the whole thing.

However, by the end of those last few hours I feel as if I've been snagged on Senlin's coat tails and will likely take the second of what I've heard is to be a four book series when it comes out in March.

Victorianesque in setting and feel, with steampunk elements and an industrious, mysterious tower as its main focus. This single POV story witnesses true character progression and setting discovery. Twists, turns, alliances and betrayals.

Enter the tower and walk along side Senlin as his ardous climb through level and status surprises and amazes you.

Brilliant and different. cant wait to listen to the rest of the books. well worth the listen.

Loved it. Exciting story, enjoyable performance. I can't wait to listen to the next book.

slow to start, but engaging to finish

beautifully read, but I found the first part slow going. it picked up later on and I felt much more engaged. This is also my first ever audio book experience, so that may have played a part in my difficulties early on.

This trilogy gets better and better!

If you loved Benedict Jacka or Ben aaronovitch these books are definitely for you. I didn't put them down for a second, and now my whole family are reading them.
It's a little like C J Sansoms honourable lawyer Shardlake, only a headmaster and not a lawyer in this case, in the most imaginative world i have ever read, and yet it was so believable.

I found this a hard read. It's quite original but the story quickly turns nightmareish both in structure and plot. Narration was good though.

The book has plenty wonderful plot twists and characters. Enjoyed it fully except for a start that took 6 hours to reveal threads of main plot. Looking forward to second book in the series

Just found the whole story terribly boring. None of the characters are likeable, notably the main protagonist. In the end I just didn't care what happened as I had no interest whatsoever... Narration is fine, but the story just isn't interesting

Enjoyable read and an original setting

The plot was fine and enjoyable, if build from a rather standard set of blocks. The setting was great, the characters likeable. The performance was very good.