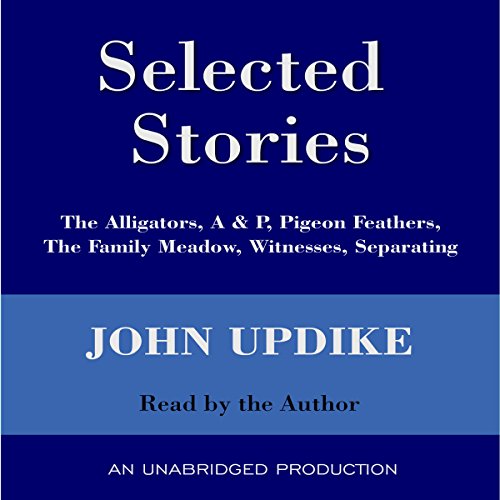 John Updike reads six stories he has selected from the 100-odd he has published.

"A & P", recounting a moral crisis on the checkout counter, is his most anthologized story.

"Pigeon Feathers", the longest story included, tells of a 14-year-old boy's fear of death and the answer he finds.

"The Family Meadow" describes a piece of America, a picnic reunion in New Jersey.

"The Witnesses" and "The Alligators" both deal with love, as felt by a middle-aged man and a fifth-grade boy.

"Separating" recounts the June day when Richard and Joan Maple separate, in front of their four children.

Mr. Updike, when asked to described his method of reading aloud, said "I try to picture the things describes, and to speak the words distinctly, and to let the emotion come through on its own."

What listeners say about Selected Stories

Beautiful stories, brilliantly written. Hadn't read any of these stories before and was totally blown away. Fantastic to hear them read by the great man himself. Enjoyed every word.

Late to the treasures of the Updike short stories, I have listened to his reading of *A & P* twice. To me, this audiobook is worth the price for this story.

A story of a high school grocery bagger's quixotic honor and chivalry in protecting the dignity of young Ladies (beauty) on a quick run to the A&P on a summer's day stirs again in me the wonders and idealism and beauty of youth as well as my belief and hope that chivalry still isn't dead and will never die.

I had no real problems getting past Mr. Updike's nasally accent to get swept up in his stories.

I wish John Updike had recorded every word he ever wrote. The prose is glorious. And I could listen to him read forever. "Pigeon feathers." "Alligators". Has anyone ever done adolescence better?