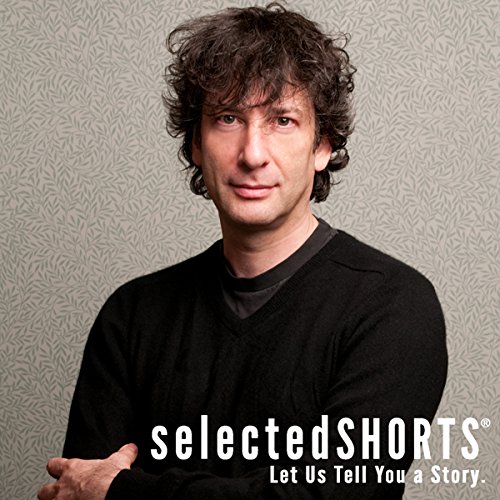 Neil Gaiman's "Chivalry" performed by Christina Pickles. A delicious tale of an elderly British matron who buys the Holy Grail at a rummage sale.

Selected Shorts is a weekly public radio show broadcast on over 130 stations to about 300,000 listeners. It is produced by Symphony Space and WNYC RADIO and distributed by Public Radio International. The radio show is recorded live at the popular New York City stage show, which began in 1985 and still enjoys sell-out audiences today at the Peter Sharp Theater at Symphony Space on Broadway and 95th Street in New York City. Selected Shorts is one of the premiere reading series in New York City. The Selected Shorts podcast consistently ranks as one of the most popular podcasts on iTunes.

Neil Gaiman's obviously had a lot of fun writing this small piece, and that fun is contagious. Helped by Christina Pickles's priceless delivery, that story of an old lady picking up the Holy Grail for a few pence at Oxfam packs tons of humour and emotion in 27 short minutes. Being more of a "laughing inside" audience, I found myself chuckling like an idiot with my earphones on. Highly recommended.

Share this with anyone and everyone whose lives you wish to enrich- it contains the magic we all wish existed, and is told with such skill and empathy. Wow.

Delightful story read to a live audience. Short and lovely. Sounds like it was on a radio show. The only problem is that she speaks very loudly at times and inaudibly whispers at others which does not suit my situation. It's late.at night and my husband is sleeping. I'm using headphones, jumping out of my skin and loosing more hearing during those loud bits! Otherwise great performance.

This was an adorable story of a widow who buys the Holy Grail. Lancelot comes looking for it as well. Mrs. Whittaker maintains her stoic British composure throughout. Funny and poignant, it makes you reflect on life. This is my introduction to Neil Gaiman and I will have to check out more of his works.

I loved the print version and thought that there was no way an audio version could possibly top it. I was happily surprised.

Would you listen to Selected Shorts: Chivalry again? Why?

Yes!! I've listened to this story multiple times, and love it!! The characters are perfectly written, and the story is fresh and original. A quaint listen that is perfect for passing the time.

Which character – as performed by Christina Pickles – was your favorite?

My favorite character was Mrs Whitaker.

Yes! I even stayed in the car longer to finish the story, even after I'd reached my destination.

Highly recommend! This story is only about 20-30 minutes in length and is a very sweet story to show that there's still some magic in the world. If you love Neil Gaiman and fairy tales, this is the book for you!

I was so taken with the tone of this story that when it all came true i laughed out loud. Very nice...

I've listened to this story numerous times. It is funny, sweet and quirky all at once. I enjoy the juxtaposition of the mundane and fanciful. I also enjoy Ms Pickles smooth voice and phrasing.

one story in and both the story and the narrator are superb.

If it continues this good it will be one of favorites

Chivalry by Neil Gaiman is a short story about a modern day English widow who comes into possession of the Holy Grail. She is lobbied by the legendary knight Sir Galahad to first give and then subsequently trade for the Grail. In classic British "unflappableness," the woman carries on perfectly normal conversations with him and ends up putting him to work in her garden and attic. While she eventually relents to his entreaties, she refuses the biggest prize in deference to the memory of her deceased husband and proper English sensibilities.

The style is typical Gaiman with an extensive smorgasbord of classic mythology, stereotypical behavior, and quirky juxtaposition, all told in a light, free flowing, and humorous manner.

The narration is exceptionally well done with not only an excellent range of voices, but the timing, delivery, and nuanced manner is perfect for the comedic aspects. Of note, this is a performance done with a live audience.

It's all a matter of perspective.

Good Omens was my second Neil Gaiman book (Don't Panic was first). This story seems to have a bit of Terry Pratchett hovering in the background, and that makes me smile.