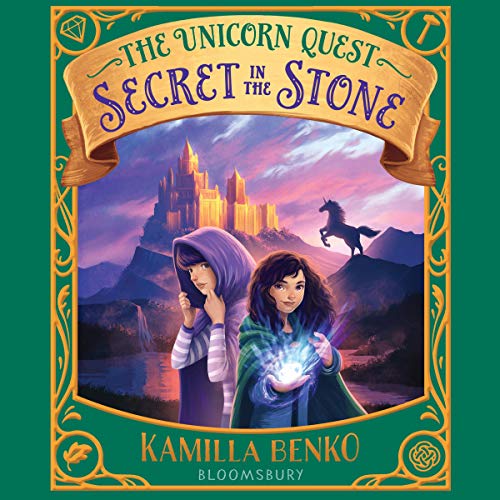 Secret in the Stone

By: Kamilla Benko
Narrated by: Jennifer Woodward
Try for £0.00

Bloomsbury presents Secret in the Stone by Kamilla Benko, read by Jennifer Woodward.

The second book in an enchanting fantasy series The Unicorn Quest, about a real-world girl and her sister in a land full of magic and strange creatures.

Claire Martinson and her sister Sophie have decided to stay in Arden - the magical land they discovered by climbing up a chimney in their great-aunt's manor. If what they've learned is true, the sisters are the last descendants of the royal family, and only a true heir of Arden - with magic in her blood - can awaken the unicorns.

Since Sophie has does not have magic, the land’s last hope rests on Claire. The sisters journey to Stonehaven, a famed Gemmer school high in the mountains of Arden, so Claire can train in the magic of stone. As Claire struggles through classes, Sophie uncovers dangerous secrets about the people they thought they could trust. With Arden on the brink of crumbling, can Claire prove she is the prophesied heir and unlock the magic of the unicorns before it's too late?

What listeners say about Secret in the Stone