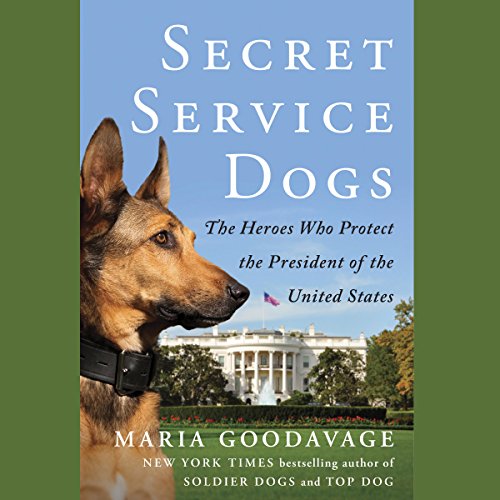 The Heroes Who Protect the President of the United States
By: Maria Goodavage, Clint Hill - foreword
Narrated by: Nicole Vilencia
Length: 9 hrs and 44 mins
Categories: History, Americas
3 out of 5 stars 3.0 (2 ratings)

In an age fraught with terrorism, United States Secret Service canine teams risk their lives to safeguard the president, the vice president, their families, visiting heads of state, and a host of others. Unprecedented access to these heroic dog teams has allowed a fascinating first-time-ever look at a very special breed of heroes.

"If you let down your guard on the job," says Special Agent Bill G., canine program manager, "it can change the history of the world." It's a burden Secret Service dog handlers take extremely seriously regardless of their specialty. Tactical dog handlers on the White House lawn, handlers whose dogs sniff for explosives around the world, and those who walk their amiable floppy-eared dogs up and down Pennsylvania Avenue all live one common mantra: Not on my watch. Or my dog's.

Secret Service Dogs immerses listeners into the heart of this elite world of canine teams who protect first families, popes, and presidential candidates: the selection of dogs and handlers, their year-round training, their missions around the world, and, most important, the bond - the glue that holds the teams together and can mean the difference between finding bombs and terrorists or letting them slip by.

"These animals will gladly run into a hail of gunfire," says '"Stew", a Secret Service ERT tactical canine unit supervisor. "All they ask in return is for their handlers to throw the ball with them, pet them, and talk to them in an embarrassingly high voice."

I thought this book was dire. None of the stories are very interesting and seem randomly thrown together, but worst of all they are written and read in such a patronising way I felt like I was listening to a children’s book. I must admit I didn’t make it to the end so perhaps it improves later on, but I highly doubt it.

I have read all three of Maria Goddavage's books on working dogs, and I believe this may be the best of them, although I also recommend the others. We foster Military Working Dog puppies for the Breeding Program at Lackland in San Antonio so we know something about MWDs and how they are used in the field. It was interesting to learn about the similarities and differences in procurement, training, and deployment of the Secret Service canines.

The puppies we raise are all Belgian Malinois or Dutch Shepherds, and the breed characteristics described in this book are accurate. These dogs are highly energetic, driven, joyful, and fierce creatures--all at the same time, in one 60-90 lb. package. Even the "washouts" we have adopted are forces to nature, and not "normal" dogs. The author explains that Malinois are perfect for some situations but not for all. Agencies, including the Secret Service, often deploy "floppy-eared" or "friendly-looking" dogs where close contact with the public is required since the "pointy-eared" canines are intimidating to many folks. It is important to understand the knowledge and consideration that goes into deploying the right dog for each job and to respect that all are needed for the program to be fully successful.

I enjoyed the structure of this book even though others have criticized it. The narrative alternated throughout the book from facts about the dogs and the program to accounts of specific dogs and their handlers. It was basically chronologic but not obviously so. In my opinion, the author found an engaging way to provide basic information while also demonstrating the vital emotional component that allows the human/canine teams to function effectively. Dogs are not "equipment" as some believe; they are living, breathing, sentient beings who respond best when this is understood and acted upon.

I recommend this book highly to all citizens. We fund programs for working canines in our military, law enforcement, fire departments, the Secret Service, and other public agencies. We see working dogs in many areas of our lives, and we owe it to ourselves and our communities to have an understanding of their value, their needs, the services they render us, and the great debt we owe them.

Fantastic Stories about the great partners in the Secret Service!

Enjoyed this book very much, some humor, some sad parts but all very interesting. I had no clue what these dogs and handlers do. I listened to it twice in case I missed something. The narrator had a
Pleasant voice and it was as if she was close by telling the stories. Well written and enjoyable!!

Brought me closer to my dog

listened in 2 days. Wonderful for any dog lover. this book will enlighten you to the wonders of K-9's