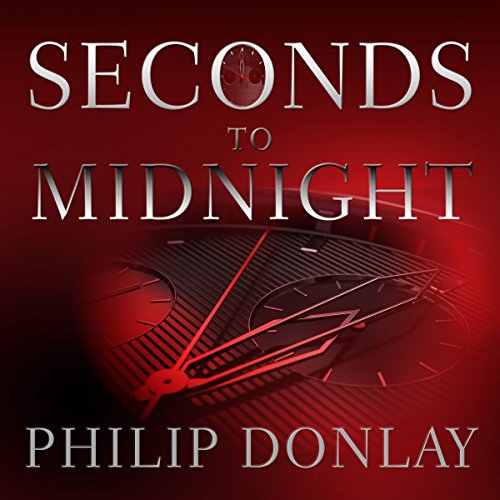 By: Philip Donlay
Narrated by: Randall R. Rocke
Try for £0.00

While on a routine Eco-Watch flight above northern Canada to study one of the most powerful solar flares in history, Donovan Nash and Michael Ross narrowly miss colliding with another aircraft - a Boeing 737 that's not supposed to be there. With the mysterious 737 trailing smoke, Donovan and Michael watch as the stricken aircraft makes an emergency landing on a frozen lake.

As the Boeing breaks through the ice and begins to sink, a figure escapes into the frigid water and manages to climb up onto the ice. Donovan reaches the lone survivor and discovers it's a young woman. Just before she blacks out, she whispers a dire warning, "Don't let them know I'm alive they'll kill everyone."

Seconds to Midnight plunges Donovan Nash and the Eco-Watch team into a fight for their lives. While Donovan searches for answers at the bottom of a frozen lake in Canada, his wife, Lauren, runs from operatives embedded in the top levels of the Russian Government. With communication in the Northern Hemisphere crippled by the massive solar storm, Donovan, Michael, and Lauren battle for each second, as the clock ticks toward a possible Armageddon.

What listeners say about Seconds to Midnight

As usual, this latest Phillip Donlay/&amp;amp;amp;amp;quot;Donovan Nash&amp;amp;amp;amp;quot; thriller was a great yarn HOWEVER, it was totally spoiled by the narrator. Rocke's depiction of the various characters was painful to listen to at the very least and simply dreadful most of the book. Further, his attempts to distinguish various accents failed completely and most of the time, it was impossible to tell which character was supposed to be &amp;amp;amp;quot;speaking&amp;amp;amp;quot;. Without doubt, the worst Audible narrator of all Audible books I've bought in the many years I've had a subscription. Having read or listened to this entire series of books, I was dreadfully disappointed! BEWARE!

It was hard to even get into the plot of the book...the narration is in a staccato style with each word precisely pronounced...pair that with the different accents “attempted” for each character and the whole book becomes absolutely PAINFUL to listen to... I wouldn’t recommend the audible version to anyone as it ruins the book!

The narrator ruined the story for me. I gave up on it. I may have stuck with it with a different narrator.

Philip Donlay gives us another exciting story. The characters are well drawn and believable. The action pulls the reader into the adventure and the action never stops. The narration is excellent. The narrator is easy to listen to and provides the right amount of emphasis, never getting in the way of the story. He also does very credible accents. Audio books are a newfound option for me and I have been surprised at how easy it is to 'read' a book in this way.

This is the first time I have listened to an audiobook and I found it very easy to follow along. I do not know how narrators are supposed to sound but this particular one definitely kept the story interesting and his transition from character to character was smooth and effortless.
In regards to the actual story, this is my particular favorite genre and it kept me interested throughout.