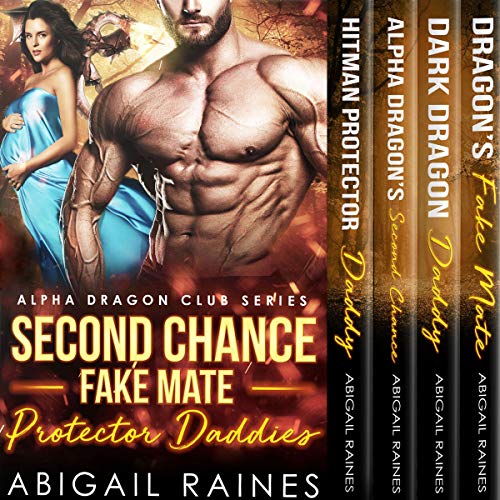 By: Abigail Raines
Narrated by: HotGhost Productions
Try for £0.00

Justin King lives by one code: play to win.

As a CEO and as a dragon, Justin is never afraid to go after what he wants.

But when his stock starts tanking and his bad boy image starts doing more harm than good, his publicist comes up with a strategy to change the whole game: Fake girlfriend.

Justin’s never had trouble with the ladies, but playing up a fake relationship for the press to make him look like a responsible good boy isn't going to be as easy as he thought.

Especially once he meets his match.

Nicole is just a coder for Justin’s company, a spunky single mom scraping by like everyone else in Manhattan.

She also happens to be a dragon shifter just like Justin.

But when fake feelings start getting too real, can Justin step up and be the dragon daddy and mate Nicole needs, or is he nothing but a bad boy after all?

I had just escaped the hell of prison when I met her.

It was the night I was protecting other dragon shifters on the streets of New York.

I never expected to run into Dana.

Now, it’s my job to protect her from the dangers that lie ahead.

I’ll give her everything she deserves.

Except for one thing.

I have no place for it in my heart.

Can Dana bring out the humanity in me?

Or...is being a monster my only destiny?

For years, Jude Fairchild has loved one woman.

But falling in love with your best friend is always tricky and for Jude, it’s also unrequited.

When Sierra Lowell returns from England after a two-year fellowship away from the tight-knit aristocratic dragon shifter circles of New York, she’s excited to see her best friend Jude again.

But Jude’s less than enthused about the new dragon in town showing interest in Sierra.

Edward is everything Jude isn’t and most importantly, Sierra’s parents love him.

It’s Jude’s last chance to show his best friend how he really feels after all this time or else risk losing his one shot at happiness.

But it will take more than an impressive hoard and his dashing good looks to win Sierra over from Edward.

It will take the fire of a dragon who will fight for his love and the will to open his heart. Will that be enough for the girl of his dreams?

Jessie has never had it easy. Left an orphaned dragon shifter on the streets as a kid, when he was picked up by Darryl, a powerful mobster and dragon shifter in New York, Jessie was only grateful.

But doing Darryl’s dirty work has done a number on Jessie’s mind and heart.

Jessie’s ready to get out of this violent lifestyle for good when Darryl convinces him to take just one last job while on vacation to the woods.

I really enjoyed this one. The characters were all unique and I enjoyed the situations that they all got into. I will definitely be listening to this one again

While I liked the story lines, I was distracted by several malapropisms. A good editor should have caught those.
I was disappointed that this collection of stories was released without telling the stories of the rest of the club. I was disappointed enough by this recording that I doubt that I will go looking to see if there are more.
The narrator made no attempt to change her voice for the different characters, thus causing some confusion as to who was speaking. She also mispronounced several words. Again, whoever was directing her should have caught these issues before the recording was released.

the story was ok. The narrator wasnt.It was hard to tell whether amale or female caracter was speaking. there was no difference in the voices.

The stories were okay

The stories were interesting. The romances were steamy but the narrations were distracting. The “male” voices didn’t change from the female voices and several times the words were mispronounced or even changed making no sense.

I loved every single one of these books. The Alpha Dragon club is a bunch of bachelor dragons and of course they all find the woman they love and there's a baby involved in three of them. The bad guy in every single book is a evil antagonist and are all very unique except for one of them. Dark Dragon is my favorite one. The women narrating the books did a great job separating the characters and keeping me absorbed in the books. Correct enunciation and page breaks.

Interesting series. Good characters, and original stories. Very enjoyable. HotGhost productions needs to use narrators who are familiar with big words. A large amount of words were mangled, but the stories were still enjoyable.

I liked the stories and the characters. Some of the narrators were better than others. Otherwise, I enjoyed them.