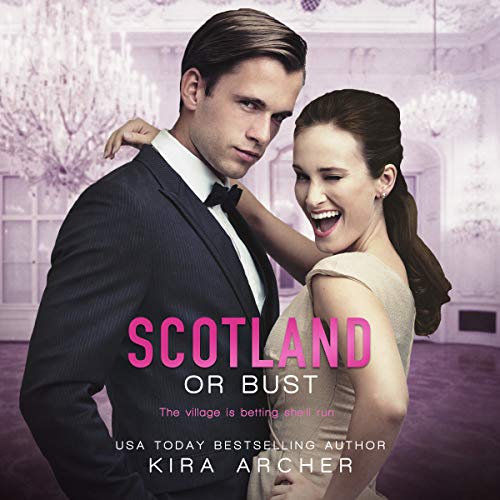 By: Kira Archer
Narrated by: Pippa Jayne
Try for £0.00

After dumping her boyfriend, Nicole Franklin jumps on a plane and heads to Europe. Sure, money and a job would have been nice to line up first. Even a visa, for that matter. So now she has to play tour guide at an Outlander experience for the most obnoxious man on the planet. Until she stumbles into the wrong bed in the middle of the night and wakes up in Harrison’s arms. Now his family thinks they’re engaged, and the entire village is betting on how long before she’ll be running for the hills.

Harrison Troy has a reputation in the town for burning through assistants. And the bubbly new one he’s just hired is likely no different. But his family quickly has them “engaged”. He should be upset, but she’s the perfect buffer for his interfering family. She says she doesn’t need another man in her life - even if he comes with a castle - and that’s fine with him. So why can’t he stop thinking about the woman who is charming everyone in the town, and maybe even him?

What listeners say about Scotland or Bust

Pippa Jayne is one of my favorite narrators (especially when it comes with a British or Scottish accent) and this story was cute (especially if your an Outlander fan) I’ve been looking forward to Harrison’s book and I wasn’t the least bit disappointed. Grannie was THE BEST secondary character in this while series and it’s worth it for her scenes alone.

Didn't think I like this book but it was a witty book with my kinda wacky family.

Love Harrison- have from the first book. Now knowing his background- he’s even more adorable.
Just waiting on Chris’ story.

story was hilarious just like the rest of the series but didn't like narration much. the Scottish accent was over drawn.

Scotland or Bust I enjoyed this story even if unrealistic. Then found the ending ridiculous. What airline would have that rubbish happening when plane was ready to leave. Also what woman who loves a man who is a billionaire runs away to find herself.