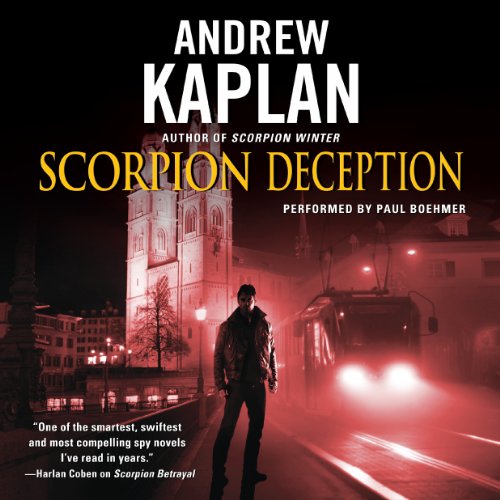 In Switzerland, a brutally efficient hit squad storms the U.S. embassy, stealing classified files and leaving no witnesses alive. Under intense political pressure to find those behind the attack - with Congressional leaders demanding military action - the CIA turns to the deadliest agent they know: Scorpion. But Scorpion is unwilling to get involved...until he learns his name is at the top of one of the stolen lists.

What Scorpion uncovers sends the CIA scrambling: evidence linking the attack to an unknown Iranian power broker known as "The Gardener". Scorpion follows the trail to Zurich and Barcelona, where he meets his match in Scale, an agent as lethal as the viper that is his namesake. A deadly dance of deception ensues, bringing Scorpion into Tehran's inner circle, but not even the political elite know who the Gardener is - or what his next move might be.

What listeners say about Scorpion Deception

If you like Alex Berenson, Brad Thor or Vince Flynn, then this espionage thriller should be worth your time and money.

On the other hand, if you demand constant realism, this audiobook may disappoint from time to time. However, I found the main character, Scorpion, complex enough to look past the times when he might have seemed somewhat super-human. By avoiding cliche and highlighting his intentions and tactics, Kaplan made Scorpion and his deeds really interesting if not always well-grounded.

I also liked the supporting characters, both the good guys and villains. In many cases, Kaplan gives readers the latitude to make their own determination of good and evil.

In contrast to many of today's espionage thrillers that focus too much on the hero's franchise rather than on satisfying endings, Kaplan skillfully delivers a conclusion to this book while still setting up the Scorpion's next battle.

In summary, the intricate plot, the realistic description of Iran's inner workings, the intrigue between factions and nations and Paul Boehmer's ability to grasp language, accents, age and gender made this audiobook one of my top "listens" of the past year.

I look forward to Andrew Kaplan's next Scorpion novel.

It's a decent book. It's nice to see a character that is so competent. I'm more interested when the expert is put in a tough situation as opposed to the every man.

The action is fantastic and well read. I would like more background detail. In that respect it almost felt abridged.

What aspect of Paul Boehmer’s performance would you have changed?

Nothing. He's a rock star.

Could you see Scorpion Deception being made into a movie or a TV series? Who should the stars be?

Yikes, I hate this question.