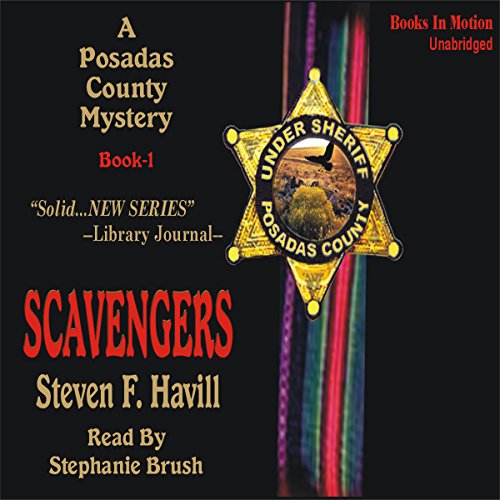 Not one, but two dead bodies are found in the harsh New Mexico desert. The first man's face is smashed beyond recognition, and the second one appears to have been forced to dig his own grave before being murdered...execution style.

Soon, new Sheriff Robert Torrez and Undersheriff Estelle Reyes-Guzman are knee deep in the midst of a brutal murder spree that spans both sides of the border. Retired Sheriff Bill Gastner is still on hand to offer his support and unerring street smarts, and to do a little investigating of his own in his new position as game and livestock investigator for the state.

"Skilled investigation, happenstance and cooperation mesh through every phase of the puzzle, ushering the reader along to one satisfying conclusion." ( Publishers Weekly)
"Throughout this low-key, character-driven series, Havill has managed as well as anyone in the genre to balance the particulars of cop procedure with the often unspoken emotions at the core of small-town life." ( Booklist)

What listeners say about Scavengers

Love the writer, read several of his books. I do not like the narrator at all. Should has stayed with Rusty. I have to rate the audio book lower than previous audiobooks.

Have purchased all the previous ha I'll books in this series. Change in narrators is jarring--characterization wildly disparate, inappropriate, and inconsistent. Who knew that so many New Mexican residents hailed from New Jersey and the valley. What is unfortunate is that the narrator-who has a pleasant natural voice--might have done a fine job just reading the text in a straightforward manner. Now I have tobuy print versions of future volumes.

Title says it all...

Ms. Brush may be a good narrator, but she is clearly clearly miscast...

Change in reader is terrible

I loved the Bill Gastner books, probably as much for the reader's style and voice as for the stories themselves. What a disappointment this book is. The characters I know and love are completely different when read by Ms. Brush. Bill Gastner is dead and in his place is some stranger. So sad.... I won't be buying any more.

The Narrator is excellent and the storyline well done. Hard to not like this authors work.

For those who have been reading Mr. Havill's Undersheriff Bill Gastner series from the beginning this book marks the passing from one era to another. At the end of Dead Weight Bill Gastner retires and Sgt. Torres is elected Sheriff of Posadas County, and Estelle Reyes-Guzman becomes his Undersheriff and becomes the new voice of the series. It's a bit unsettling to be suddenly in the mind of Estelle, privy to the thoughts of a character previously known in the series for her inscrutability. At the beginning I really missed the voice of Rusty Nelson who read the previous books with Bill Gastner as the main character and it took me quite a while to adjust to the new female protagonist. I'm not sure why Mr. Havill decided to make the change, and to be honest I sort of wish he hadn't, but ultimately the quality of the characters shines through and I adjusted to the change. In answer to those who complained there was no action they are obviously new to Mr. Havill's work as his books have always been more about the interactions of the characters in this small town and the solving of the mystery. I've never missed the bang bang action of other series with their shallow characters and predictable plots. One thing is true, the plot is sort of left hanging in this book because many of the elements continue on into the next book in the series. Give the series a try (do yourself a favor and go back and read them in order) and if you like good characters you won't be disappointed.

Do not waste your credit on this book. The new reader is worse than awful. Her clipped voice and stupid annoying, iritating characterizations totally ruin the book. I had to turn it off after 15 minutes, tried a second time and only made it 8 more minutes. It is such a shame because I totally enjoyed the series up to this point. I can't imagine anyone allowing this reader to continue. I will see if a kindle version is available and let my kindle read it to me.

No surprises, little action, events in the book do not come together at the end but lots of descriptive narative. If you have insomnia and need sleep, get this one

Is book was about a exciting as watching a car rust. this has got to be one of the most boring books I have read or listened to. the story is more about the under sherrif's every day life than it is about the story of the case she is working on. save your money and purchase something better.