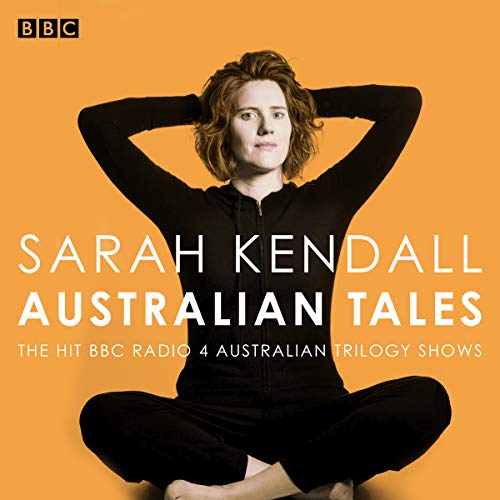 In the first trilogy of shows, each takes us on a trip, giving us a unique snapshot of small-town life in Australia in the late '80s and early '90s. At a time when most people were seeing Australians through the filter of Home and Away and Neighbours, Sarah presents a darker underbelly to the stereotype of the sun-loving, happy-go-lucky Aussie teenager.

The second trilogy jumps backwards and forwards in time and place, offering a single show in three parts. Sarah presents a collection of seemingly unrelated short stories and memories, which together combine to form a narrative that grapples with the interconnectedness of life and the nature of luck.

These cinematic stories blend comedy and tragedy in equal measure; Sarah always keeps the big laughs coming without ever diminishing the drama. Her tales blend intricate narratives with a cast of memorable characters, bringing events to life in front of your very ears.

The first episode - 'A Day in October' - won Best Scripted Comedy (Longform) at the BBC Audio Drama Awards 2018 and the 2018 Writers' Guild Award for Best Radio Comedy and was the Silver ARIA winner for Best Storytelling.

Written and performed by Sarah Kendall.

"A mini masterpiece of tragicomic storytelling." (The Times)

"An ode to all the ugliness and beauty of adolescence." (The Guardian)

"Her tale is funny, tender and has a finale that absolutely knocked the wind out of my sails." (The Herald Scotland)

As others have said, this is truly brilliant - funny and very absorbing. Everything is woven together very cleverly.

Probably the best thing I have ever listened to. So funny, but also quite profound. Found this after being fully caught up on my podcasts and I just adore it.

Utterly brilliant; it has everything

Sarah Kendall is a genius storyteller. She covers ground from mundane to existential in a style that is all her own. The closest I can describe it as is a collage of characters, voices and registers, looping back and forward through time to produce stories you could never repeat, delivered with amazing timing - often comic, but also incredibly intelligent and sometimes brave, sad and shocking. Are they true? If only we knew. My whole family loves these tales of childhood in 80s Australia and has adopted plenty of (wholly inappropriate for an 11 year old) catchphrases!

Sarah Kendall is one of the most underrated comics around. Plain speaking, funny and touching this book is a must listen.

Such a wonderful story teller. Clever and warm. Had me hooked and chuckling from the off.

Sarah Kendall has everything a good storyteller needs: Her stories are constructed beautifully with great understanding of humour Her comic timing is fantastic She does the thing great comedy does, which is to tell stories which pick the listener up and carry them between laughter and catching their breath with awe

A flawless comedy performance; at times moving and life-affirming, that doesn't wear out with repetition.

I first heard the second part of this brilliant piece on the Beeb without realising it was the second part. Having found out, I tried in vain to find the first part on iPlayer; eventually Sarah herself on Twitter (other "social" media are available) kindly told me it was available on Audible, so here we are. I think it's one of the best radio comedies I've heard - beautifully told, howlingly funny, but also poignant and sad in places. Highy recommended - and I look forward to Part Three.

Loved this! Took me back to my childhood in Australia. Hilarious even if you're not Australian. Great family and coming of age stories.

Very funny lady. Very enjoyable listen. Not sure why she's not better known yet.

These are funny, thoughtful, well tied together stories, told by a master performer. Kendall travels time and space and brings it all together for a terrific listen.