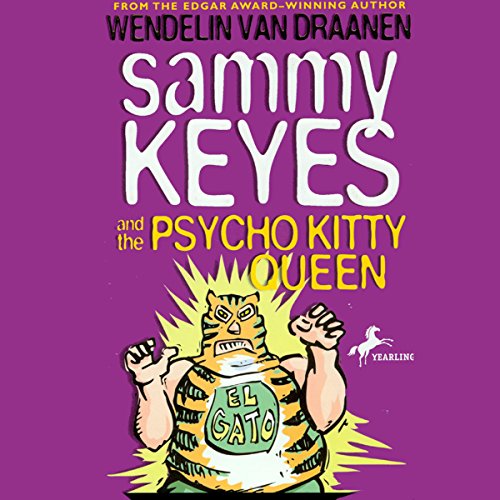 By: Wendelin Van Drannen
Narrated by: Tara Sands
Try for £0.00

All of the beloved characters are back in the ninth mystery in this popular series. This time the 13-year-old sleuth is up against a cat burglar - literally!

Cats are disappearing and Sammy is finding some of them in neighborhood garbage cans - dead! Miss Kitty, a local psycho cat lady, blames Sammy. Meanwhile, there's something fishy going on with one of the students from Slammin' Dave's Pro Wrestling School that just opened up next door to Sammy's friend Holly.

If that isn't enough, Sammy's mother reveals that her true birth date is a year off, so she isn't really turning 14, and Sammy discovers that she actually shares her birthday with archenemy, Heather Acosta. Is it another year of unlucky 13, or is this the year Sammy's luck will finally change?

"Another hit in a solid series." ( School Library Journal)
"While readers may need to suspend disbelief as Sammy outwits another crook, they'll recognize the rest of her life as believably complicated and imperfect - like their own." ( Booklist)

What listeners say about Sammy Keyes and the Psycho Kitty Queen

these are great for kids and adults

This book was amazing, my daughter listen to it 3 times. We love Sammy Keyes.

One of the best books that I have ever heard. Good for Kids. Just Amazing!