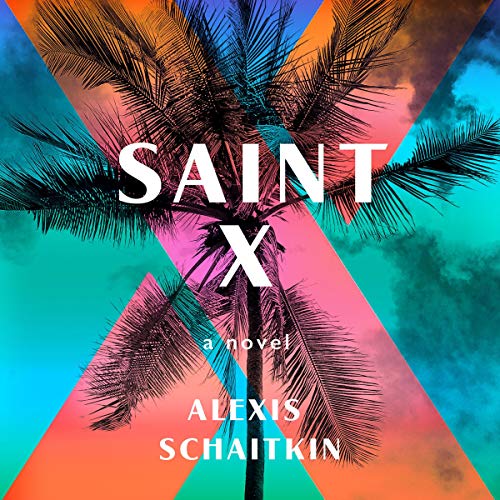 "Alexis Schaitkin's splashy debut novel, Saint X, is an audiobook lover's dream.... Queue this one up for a murderous, dreamy delight." (Paste)

Hailed as a "marvel of a book" and "brilliant and unflinching", Alexis Schaitkin’s stunning debut, Saint X, is a haunting portrait of grief, obsession, and the bond between two sisters never truly given the chance to know one another.

Claire is only seven years old when her college-age sister, Alison, disappears on the last night of their family vacation at a resort on the Caribbean island of Saint X. Several days later, Alison’s body is found in a remote spot on a nearby cay, and two local men - employees at the resort - are arrested. But the evidence is slim, the timeline against it, and the men are soon released. The story turns into national tabloid news, a lurid mystery that will go unsolved. For Claire and her parents, there is only the return home to broken lives.

Years later, Claire is living and working in New York City when a brief but fateful encounter brings her together with Clive Richardson, one of the men originally suspected of murdering her sister. It is a moment that sets Claire on an obsessive pursuit of the truth - not only to find out what happened the night of Alison’s death but also to answer the elusive question: Who exactly was her sister? At seven, Claire had been barely old enough to know her: A beautiful, changeable, provocative girl of 18 at a turbulent moment of identity formation.

As Claire doggedly shadows Clive, hoping to gain his trust, waiting for the slip that will reveal the truth, an unlikely attachment develops between them, two people whose lives were forever marked by the same tragedy.

For fans of Emma Cline’s The Girls and Lauren Groff’s Fates and Furies, Saint X is a flawlessly drawn and deeply moving story that culminates in an emotionally powerful ending.

"Here is a marvel of a book, a kaleidoscopic examination of race and privilege, family and self, told with the propulsive, kinetic focus of a crime novel. Brilliant and unflinching, Saint X marks the debut of a stunningly gifted writer. I simply couldn’t stop reading." (Chang-Rae Lee, author of On Such a Full Sea)

"Saint X is hypnotic. Schaitkin's characters...are so intelligent and distinctive it feels not just easy, but necessary, to follow them. I devoured [it] in a day." (Oyinkan Braithwaite, New York Times Book Review)

"Saint X, Alexis Schaitkin’s atmospheric new novel, is ostensibly about a young American girl who goes missing while on a family vacation in the Caribbean. But it is more than that. The book also unpacks timely social and cultural issues - about grief, truth, white privilege and our murder-as-entertainment culture.” (Washington Post)

What listeners say about Saint X

I’d rather be alone with my thoughts...

I’ve given this book over five hours and oh how I wish I had that time back. Seven hours left and I’m out. Not only is there no mystery as your outright told who did wary on, there is so much jumping around and seemingly useless information given that I can’t force myself to pay attention. The loooooooong list of narrators should have been my first clue. I’ve listened to hundreds of books over the years and never had more than a couple narrators. This production is bizarre.

Skip it and save your credit.

Why do the best books of the year always come out so early? Now I have nothing to look forward to...

STUNNING. Is it weird that I’m proud of Alexis Schaitken for writing such a great novel? A gorgeous trashy beach read that’s neither trashy or for the beach. Page turning, tear-inducing, poignant and bold af. Who knew a true crime novel about a juicy 1990s Lifetime movie of the week fable would result in profound deliberation about racism, classism, family, love, honesty and fear? I loved this book, highly recommend, and the narration is a SYMPHONY OF PERFECTION.

This book was so scattered. I couldn’t keep the characters straight. After trying to read it for some time, I was lost.
Margaret Bates

I think the author had a good basis for this story (loosely based on the Natalie Holloway disappearance) but the execution was very disjointed. The use of multiple POVs added nothing to the story, and, in the end, the reader knows what didn't happen, but not what did. Very frustrating. I liked the initial set-up of the story, the discriptions of Saint X island and the group of vacationers and employees who were all ultimately affected by Alison's death. But the impact of that loss got lost in all the dissembling by Claire/Emily and the rambling narrative. A trim of about 100 pages would have made this a better book. The narrators were fine, but quite a few had very little to add to the story ( see excessive use of POV ).

Love loved this book so much, highly recommend to everyone. You won’t regret the purchase! I need to form my own book club just to discuss and unpack everything! Wow!

Lots of intricate and often distracting descriptions with some unlikely metaphors. Somewhat engaging characters, but overall, slow-moving, with a flat ending.

This was not what I expected

The book started out good but then lost its momentum. There was a lot of information about the island & not enough answers about the death. To be honest I almost gave up 1/2 way through. I would not give it a thumbs up. to many questions left un answered.

Wonderful story, wonderful narrators! I feel as if I personally know the characters. Of course, that means that my heart broke for certain ones. Saint X is so well written, with such vivid descriptions of the island.

Some great writing, but lacking in likeable characters... making it ultimately disappointing for me.

the ending was a slight let down. but overall a good read. the plot was entertaining until...