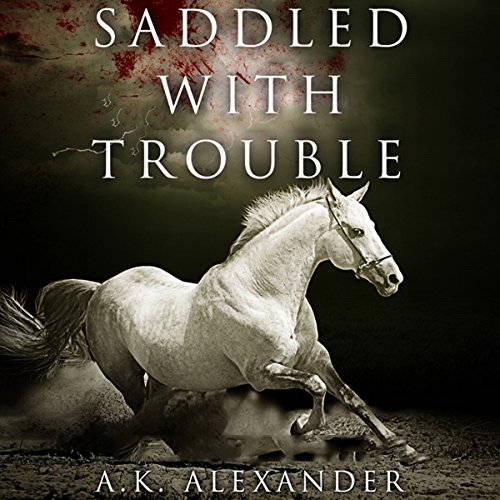 By: A. K. Alexander
Narrated by: Suehyla El Attar

A series of a different color: the first Horse Lover's mystery. Quarter horse trainer Michaela Bancroft's husband is divorcing her for a 22 year-old beauty. Stunned, Michaela is trying to rein in her life when she finds her Uncle Lou murdered. And when she's nearly run off the road, she suspects she's on the fast track to being the next victim.

What did you like most about Saddled with Trouble?

Nice to have a story set in a different "world", that of American horse breeding.

It was entertaining enough, bit overwrought at times

The narrator almost sounded as if they were reading it for the first time, with oddly and illogically inflected sentences. I thought the plot trick of having a very well-informed family friend was a bit of a cheat, as the police should have found most of what he dug up, and it seemed to accelerate the story towards a conclusion as if the writer was beginning to lose interest in it.

What didn’t you like about Suehyla El Attar’s performance?

She isn't good at male voices, very monotone. I would have enjoyed much more with a good narration.

Michaela Bancroft is having a rough time. She's in the process of divorcing her husband, Brad Warren, after ten years of marriage. Brad's new fiancee, Kirsten, is actively harassing her to get her to sign the divorce papers instantly--without holding out for the thousands of dollars Brad owes for the medical bills insurance wouldn't cover in pursuit of a pregnancy they never achieved. Her wild friend Camden has moved in with her while waiting for the settlement on her divorce, too. And with all the bills, Michaela is running her horse ranch on minimal help.

And then her beloved Uncle Lou misses a breakfast with her that he had suggested. She goes to his ranch--and finds him in his prize stallion's stall, with a pitchfork through his back.

Soon Michaela is getting confusing signals from handsome police detective Jude Davis, as he seems sympathetic yet asks hard and upsetting questions, and learning unsettling things about everyone she cares about. Her father is gambling (and losing) again, Camden's new boyfriend has been pressuring Lou to sell his ranch, Lou's much-loved second wife, Cynthia, is pregnant despite the vasectomy Lou had several years ago. An especially upsetting and awkward discovery is that Lou was being sued by people who claimed they paid thousands for semen from his prize champion stallion, but received semen from some other, unknown stallion. What's especially disturbing is that they appear to have proof.

It's all complicated, alarming, and confusing for Michaela, and it gets even scarier when strange things start happening around her own ranch, and she gets run off the road by a big Ford truck.

I liked Michaela and her friends, and as complicated as the underlying plot behind her uncle's death gets, in the end it all hangs together and makes sense. A fun read, or listen.

Recommended for a good beach read.

I received a free copy of this audiobook from Audible in exchange for an honest review.

Narrator is good during prose, but accents are borderline offensive, especially impersonating someone with a disability/different nationality.

Decent little mystery. Not a lot of actual horse-related issues in the plot.

I really wanted to like this book. But there were too many things wrong. First, the story is set in California, but the lead character and her friend had southern accents. Second, two of the characters are from the Hawaiian islands and speak in a dialect that prevents them from speaking in correct sentences. Third, it is difficult to tell the difference between some of the voices that the narrator uses for the characters. Forth, the narrator's voice is annoying. Once I got passed all of that, I have to say that the plot is actually good and the characters are likeable. It's an interesting story and I might buy the next book. Unfortunately the narrator is the same. But I'm hoping to find out a bit more about the characters. I'm giving this series and this author one more chance to impress me.

If you love horse's and mysteries, then AK Alexander is your writer! Very enjoyable, well written novel. Thank you AK!