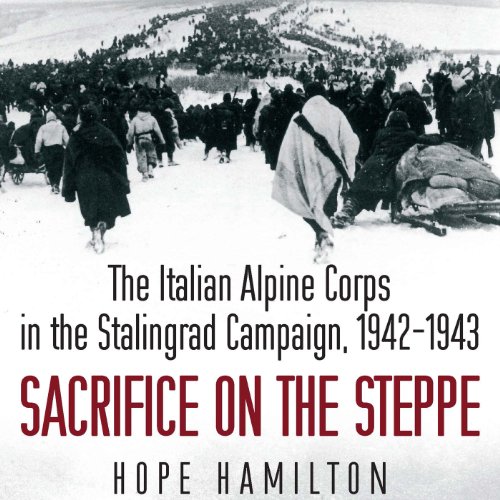 Sacrifice on the Steppe

By: Hope Hamilton
Narrated by: James Langton
Try for £0.00

When Germany’s Sixth Army advanced to Stalingrad in 1942, its long-extended flanks were mainly held by its allied armies - the Romanians, Hungarians, and Italians. But as history tells us, these flanks quickly caved in before the massive Soviet counter-offensive which commenced that November, dooming the Germans to their first catastrophe of the war. However, the historical record also makes clear that one allied unit held out to the very end, fighting to stem the tide - the Italian Alpine Corps.

As a result of Mussolini’s disastrous alliance with Nazi Germany, by the fall of 1942, 227,000 soldiers of the Italian Eighth Army were deployed on a 270km front along the Don River to protect the left flank of German troops intent on capturing Stalingrad. Sixty thousand of these were alpini, elite Italian mountain troops. When the Don front collapsed under Soviet hammerblows, it was the Alpine Corps that continued to hold out until it was completely isolated, and which then tried to fight its way out through both Russian encirclement and “General Winter,” to rejoin the rest of the Axis front. Only one of the three alpine divisions was able to emerge from the Russian encirclement with survivors. In the all-sides battle across the snowy steppe, thousands were killed and wounded, and even more were captured. By the summer of 1946, 10,000 survivors returned to Italy from Russian POW camps. This tragic story is complex and unsettling, but most of all it is a human story. Mussolini sent thousands of poorly equipped soldiers to a country far from their homeland, on a mission to wage war with an unclear mandate against a people who were not their enemies. Raw courage and endurance blend with human suffering, desperation and altruism in the epic saga of this withdrawal from the Don lines, including the demise of thousands and survival of the few.

Hope Hamilton, fluent in Italian and having spent many years in Italy, has drawn on many interviews with survivors, as well as massive research, in order to provide this first full English-language account of one of World War II’s legendary stands against great odds.

What listeners say about Sacrifice on the Steppe

Would you listen to Sacrifice on the Steppe again? Why?

Hope Hamilton brings to these pages the sad and very harrowing story of the Italian Alpine Corps foolishness in allowing themselves to join with Mussolini in following Hitler in his foolhardy invasion of Russia. Catastrophe on the Steppe is truly what it was and most of them never saw Italy again as they still lie out there in unknown graves in the vastness of Eastern Russia. It all makes for a horrifying but moving and fascinating story.

This is an interesting topic and promised to fill an important gap around Italy's involvement on the Eastern Front. Sadly this promise is not delivered. From early on, the narrative becomes pretty tedious. To save you the bother, essentially the Italians are jolly nice country boys with poor equipment who get on well with the homely Russians, are desperate to make pasta for everyone and shocked by the behaviour of those nasty Germans. They are noble and brave, but wholly unprepared, fight a desperate and unrecognised war and are not appreciated by the Germans.

It is Captain Corelli with snow.

There is little analysis, but lots of reminiscences from moist-eyed old veterans. Quite often it is obvious that they were incompetent and exacerbated the disaster, but that is explained by the fact that they were just jolly nice country boys.....

A well researched book showing how a underequipped and brave corps of Italians with obsolete equipment gave there all in the most horrific front of the war.

Tens of thousands of my countrymen dead.

I am a history buff & know a great deal about WWII. The story of the betrayal of the Italian Alpine troops by the Germans is an old story in my Italian family. I have no doubt that Ms. Hamilton's research & scholarship have replaced the largely apocryphal stories I've always heard.

Having said that, I feel very skeptical about the information presented here. Hamilton is talking about elite Italian mountain infantry - I'd love to believe that my countrymen were plaster saints who always loathed the Germans, but it doesn't ring true. These men were sad to leave home, but going-ho about going to Russia with their allies. They admired the German soldiers of the Wehrmacht. Hamilton notes chastely that when Italian troops "misbehaved" they were disciplined severely. Again, it doesn't ring true. I simply don't believe that the Italians didn't "misbehave" right alongside their German allies in the Wehrmacht & Einsatzgruppen.

Finally, I just couldn't finish it. I got about 3/4 through with it, but the continuing portrayal of Italian troops as saintly helpers of suffering people finally saccharined me right out of the book. I'd like to think well of my ancestors. But none of them were this saintly