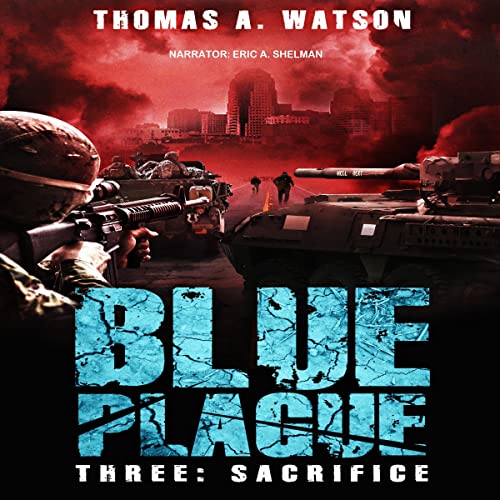 A battle-hardened clan with the best American weaponry versus fast, ravenous blue zombies! Who will triumph?

The apocalypse is behind them. The battle for the future is ahead. And the walking dead are everywhere.

Bruce and his family have gathered a clan of battle-hardened survivors and awesome military-grade weaponry…and now the time has come to put the fear of God in the zombies that have destroyed civilization as we know it.

But these aren’t the zombies you’re expecting. They’re smart…. They’re fast.... They can heal.... And they can even reproduce. Now they’ve gathered a horde as large as a city, and only Bruce’s warriors and weapons stand between them and the end of the world.

The bravest men and women in America, the most devastating firepower the military ever made, and Bruce’s brilliant tactics all come together on the battlefield that was once Shreveport, Louisiana for a crucial confrontation with the blues – a possible turning point in the war.

But will all that be enough? What more will the last humans be forced to sacrifice?

What listeners say about Sacrifice: A Zombie Apocalypse Thriller

I love the corny goodness

The family is full of hypocrisy, makes me want to become a Blue a bite them

I love watson novels always alot of action, family values, and laughter. He is one of my favorites authors. The kids in his book are so cool and the parents wise. Looking forward to the next book in this series on audible.

Don’t hesitate to buy this book! Just do it!

In the beginning acknowledgements, the author states his wife hates long books. I cannot tell you how happy I was to see this book was almost 17 hours long but as I listened I felt a sense of panic knowing the clock was ticking down. That’s how much I absolutely LOVE Mr. Watsons work. Every single book of his is such a fun, crazy, silly and intense ride. He is possibly my favorite author in this genre with one exception and that author’s work is a very different style. Teamed up with Eric A. Shelman (who’s zombie books are also AMAZING) makes this series one for the records. I just wish he could reach more readers because once they discover his work they will be hooked and wait in anticipation just like I do for his next release. I just hope we don’t have to wait too long for the remainder of this series to be released here on Audible.