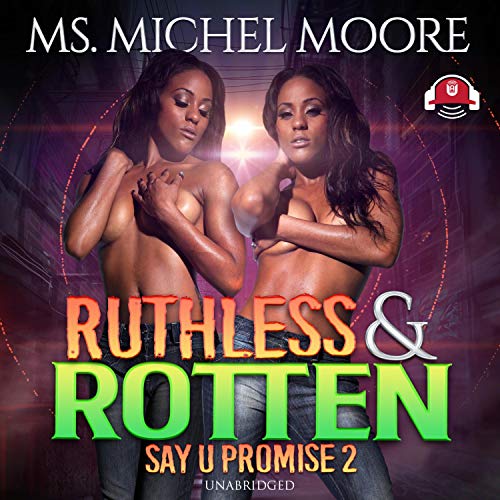 By: Ms. Michel Moore
Narrated by: Katherine Dollison
Try for £0.00

Ms. Michel Moore is back with another gripping installment of the dramatic Say U Promise series.

Forced to flee Detroit, ruthless and rotten Kenya and her identical twin, London, have dodged the bullets of a vicious hired hitman and endured the pain of a brutal rape. Now, due to mistaken identity, the girls must deal with Storm's strange disappearance and his partner's heinous murder before it's too late and they’re next.

Once again the sisters' lives are turned upside down. This time, the consequences could land them both in jail - or dead and unclaimed in the county morgue.

What listeners say about Ruthless and Rotten

it was a waste of time buying this.

I'm not sure why it didn't just finish with the first book. waste of time and money

This book was hard to read. The narrator was awful I felt like I was bag in high school and the teacher was reading out loud the class.

This narrator needs to work on reading fluency. The pauses between every word just to make sure every word was pronounced was horrible. The voice infliction and tone was always in the wrong places.

It’s a good book but the original voice would have been better!!! The ending took me out

I know they want you to have feelings but some of it was unrealistic..stories need to be believable and relatable.

I guess blood ain't thicker than water... that's why folks need to mind THERE business!!!