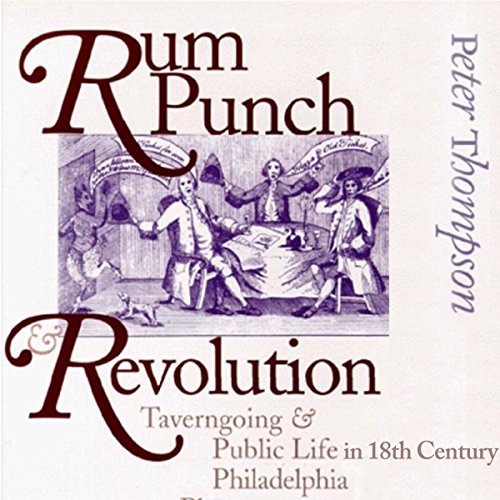 By: Peter Thompson
Narrated by: Gary Roelofs
Try for £0.00

There were, Peter Thompson notes, some 150 synonyms for inebriation in common use in colonial Philadelphia and, on the eve of the Revolution, just as many licensed drinking establishments. Clearly, 18th-century Philadelphians were drawn to the tavern. In addition to the obvious lure of the liquor, taverns offered overnight accommodations, meals, and stabling for visitors. They also served as places to gossip, gamble, find work, make trades, and gather news.

In Rum Punch and Revolution, Thompson shows how the public houses provided a setting in which Philadelphians from all walks of life revealed their characters and ideas as nowhere else. He takes the listener into the cramped confines of the colonial bar room, describing the friendships, misunderstandings and conflicts which were generated among the city's drinkers and investigates the profitability of running a tavern in a city which, until independence, set maximum prices on the cost of drinks and services in its public houses.

Taverngoing, Thompson writes, fostered a sense of citizenship that influenced political debate in colonial Philadelphia and became an issue in the city's revolution. Opinionated and profoundly undeferential, taverngoers did more than drink; they forced their political leaders to consider whether and how public opinion could be represented in the counsels of a newly independent nation.

"A gold mine.... The author creates a fascinating story, rich in tidbits and anecdotes." ( Choice)
"A marvelous book about an important, interesting, and diverting subject." ( American Historical Review)

What made the experience of listening to Rum Punch & Revolution the most enjoyable?

...because I'm the narrator; but this book was a pleasure to have produced--informative, insightful, and current in the sense that the oligarchy we are currently seeing in our national government (not to mention states and local) has a long tradition and cannot be "corrected" merely by wishing and hoping. The correction needs to come thru another "revolution" where the power is actually invested in the people.

Wow! I was great--clear, articulate, and matching the ideas with intonation and emphasis perfectly! (All kidding aside, I enjoyed narrating this book.) And I hope that hundreds of listeners enjoy it too!