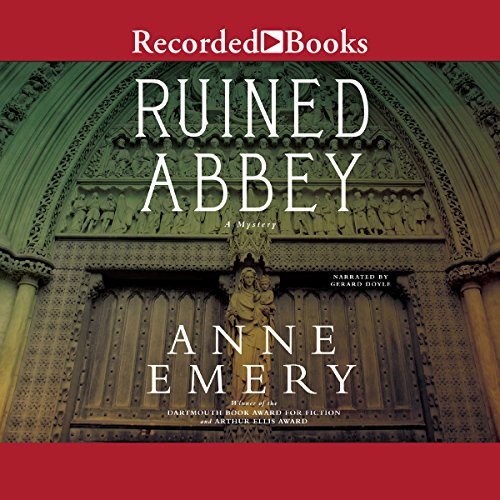 It's 1989. The Troubles are raging in Ireland, bombs exploding in England. In this prequel to the Collins-Burke series, Father Brennan Burke is home in New York when news of his sister's arrest in London sends him flying across the ocean. The family troubles deepen when Brennan's cousin Conn is charged with the murder of a Special Branch detective and suspected in a terrorist plot against Westminster Abbey. The Burkes come under surveillance by the murdered cop's partner and are caught in a tangle of buried family memories.

From the bullet-riddled bars of Belfast to an elegant English estate, Ruined Abbey combines a whodunit with a war story, a love story, and a historical novel while exploring the eternal question: What is fair in love and war? It all starts with a ruined abbey.

The performance was really poor

Would you recommend Ruined Abbey to your friends? Why or why not?

This is a prequel to Emery's Collins-Burke series that is all Burke and no Collins. If I had my druthers, every book in this series would be more Burke than Collins. This story takes place in London, Dublin and Belfast during the Troubles and like Obit, the second book in the series, this one focuses not just on Father Brennan Burke but also on several members of his brilliant, but slightly manic family. One of his cousins, an IRA operative in London winds up in jail for a murder he didn't commit, and Brennan and his siblings work to get him freed and track down the real killer. The story is full of larger than life characters tied up in love/hate relationships with their family, their homeland and their church. With Father Burke, Emery has created one of the most flawed, brilliant, headstrong, stubborn and complicated characters in contemporary mysteries, all wrapped up in holy vestments. The reader is never sure which is the holier place for Burke, the cathedral or his pub.

Christian Rummel narrates all of the other books in the series and does an excellent job. However, since this takes place in England and Ireland versus Nova Scotia and since almost all the characters are Irish someone evidently decided to have Gerard Doyle narrate this book. Doyle is currently my absolute favorite narrator and I will listen to anything he reads, regardless of the nationality of the characters, but give him an Irish brogue and you have narration perfection.

I loved this book. I enjoy stories about the troubles and this was exceptional. Gerard Doyle is one of my favorite narrators as well making this a great listen.

Big reveal at the end. Hard to follow a little but not too bad. Not sure I would buy another.

Writing so poor. I’m used to Gerard Doyle giving a great read but he couldn’t save this one. For mysteries with Irish/Troubles context, I’d recommend Adrian McKinty or Stuart Neville instead.

Performance without distinct voices made it confusing. Story line was hard to follow and probably need to read the book for clarity. very disappointed

Ok I admit it. I love books about "the Irish troubles ". I listen to them all. There is something about the frustration, passion and sadness that draws me into the story. Ruined Abbey had all this and more Multi generation involvement and family love and secrets. This story drew me in from the first line. Add in the narration by Gerald Doyle and you have a 5 star book.

This book was great. I thought I knew a pretty good amount about Irish history in general and "the troubles" in particular, but I learned a lot. I love the characters and the narration is superb!

Where is Christian Rummell?

Gerard Doyle did a good job, but I missed Brennan sounding as he did in the first 7 books!