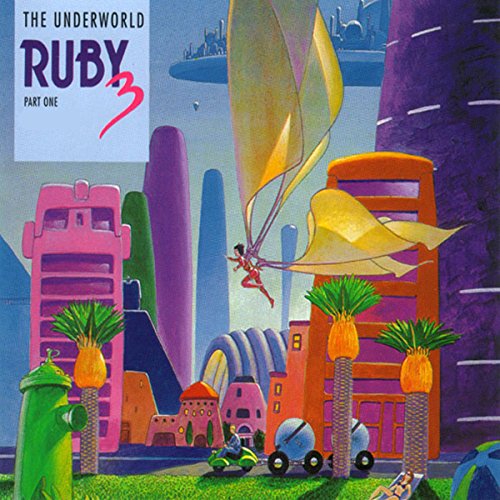 In "The Underworld", Ruby investigates the dark force within Magnifico, City of Malls, while Inanna journeys into the Seven Gates of the Underworld. In "The Invisible World", Ruby finds herself in the Astral Bar & Grill, where the decor adapts to each person's personality.

What listeners say about Ruby 3

Movie for the Mind

Listen to Ruby 1 first! Skip Ruby 2 and then enjoy this one and all the rest! Truly an audio miracle created by ZBS. The story, performances and sound-effects are inspired and inspirational. You will be swept away into imaginary universes and find yourself seeing your everyday life in a different way. It's about the future, it's about today, it's about the eternal truths and questions that confront every person at one point or another. Once you delve into the ZBS universe be prepared to be amazed. Very funny and poignant all at once, you will listen to this and then listen to it again.

The best of the Ruby series

What did you love best about Ruby 3?

This not only has the most content of the ruby series but also the most interesting of them.

Ruby of course, but all the voice acting was top notch.

No need to make a film this book is better then a film with great sound effects, music and voices.

I first heard Ruby on a collage radio station about 10 years ago and its just as good as I remembered.

I liked it. my only issue is the ending. it's far to snug and clean. seems like the writer ran out of steam toward the end. I live the character Kapoor. very well done.

I would like to take out the parts with the And/Or Sisters which was tiresome. There were too many boring segments that did not add to the resolution of the mystery nor were they entertaining for me.

Would you ever listen to anything by Meatball Fulton again?

I don't know. I liked Ruby1 and Jack Flanders first story. Maybe my like of his stories will be sporadic. So I just need to try another.

What does the narrator bring to the story that you wouldn’t experience if you just read the book?

The actors were lively, varied, and great.

Do you think Ruby 3 needs a follow-up book? Why or why not?

What I think is negligible as follow-up have already been produced.