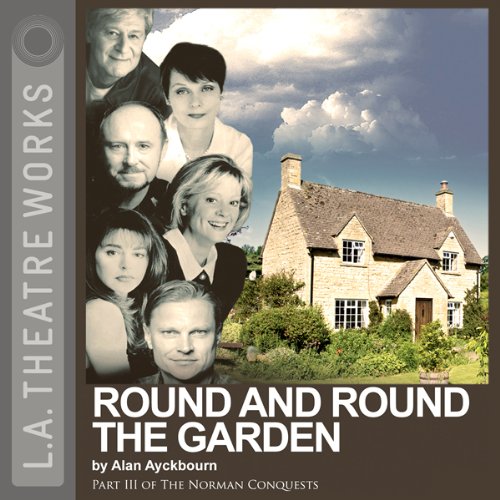 Round and Round the Garden

What makes the Norman Conquest trilogy so listenable and so entertaining throughout is that all six actors never lose track of their characters. This isn’t a broad comedy with broad comic types. Every line sounds as if it were meant to be said, no matter how silly, and there are some wonderfully silly lines. The action in this third installment takes place in the garden outside the family home. Here Rosalind Ayres, Jane Leeves, (Frasier), and Carolyn Seymour all realize that Norman has made a drunken pass at all three of them, even his own wife, and although none of them sound like they want to go to dull, damp Bournemouth for a quick tryst, in the end Norman has conquered all our hearts.

The third “battle” of Ayckbourn’s celebrated trilogy The Norman Conquests, returns us to the same weekend in the country, but this time to the setting of Mother’s overgrown English country garden. Something more troublesome than brambles is lurking among the roses. Havoc ensues among the flora and fauna, as this cynical masterpiece makes its way to a hilarious conclusion.

What listeners say about Round and Round the Garden