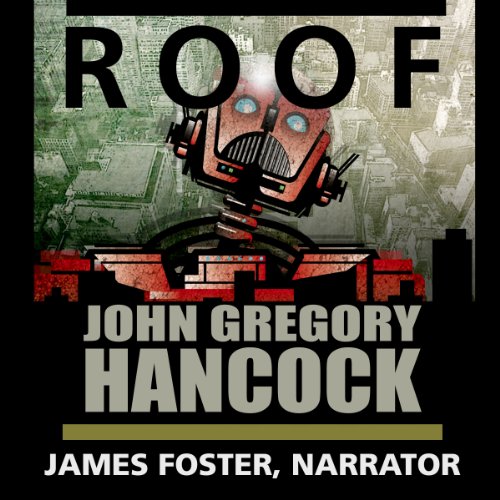 In the near future, the world has hardened.Opportunities are scarce and dwindling. Society has increasingly changed, and not for the better. Every day robots and machines replace humans in the workforce, not just in the most menial jobs, but also throughout the cubicles of the corporations that dominate the cities.

Peter Harkness is one of the few humans lucky enough to still have a job, but automatons have infiltrated his workforce. How long will his own job last? What did his roommate tell him? Oh yeah:

"Nothing is ever not possible," Brutus said. "We're making processors smaller and smaller. Code is becoming intensely complex and powerful. The sheer bulk of those executable shells can shed strands of isomer code fragments. Even if something seems not possible now, it will certainly be possible in the future. I see no reason why code can't seek its own level, form its own connections, relays."

What secrets do the roofs of the city have waiting for Peter? He is left wondering who his allies truly are in this near-futuristic dystopian world, reminiscent of Asimov, Heinlein and the goldenage of science fiction.

And yet, there may be hope.

What listeners say about Roof

How do you run from a giant?

Now' do you run from a giant?"
This is a wonderful book.
Narrated by the gentle voiced James Foster, with perfect pacing, understanding and modulation, he is Peter Harkness, a 'code' man, one of the fortunate few still to have a job in a world more frequently run by automatons, both grunt work types and, increasingly, the more intelligent AIs. They are replacing the human import in the great corporations and only the owners can still feel secure in their positions of power and wealth. After his brilliant work mate disappears, Peter knows that for him, too, no matter how valuable he seems to be, it is only a matter of time.

Perhaps this very spare introduction makes this story sound depressing. it is not. Quite the contrary, in fact. Beautifully written in the first person, the reader is right inside Peter's head, with his rambling ideas, the humour inherent in his situation and the simply delightful other characters, especially one of the robots who delivers packages necessary for his work. The book is short but filled to the brim, insightful in many ways, calling to the reader's inner being. For obvious reasons, more of this delightful story cannot here be rehearsed. Just to say buy it, enjoy the excellent meld of text and voice - then tell all of your friends. It will not disappoint.

This was a very different kind of read with a very scary future to look forward to that I hope never comes to pass. It’s a short to the point story with good characters that most can relate to. With the future turning more and more to computers makes this a believable story. Most have lost their jobs with more doing so each and every day. The human try to find away to fight back before they are killed or starve to death.

Mr. Foster does a great job on narration even the robots narration was very good. You always know who is talking. His narration is a little flat but for this story I feel it needs to be to make it more believable. His women voice are just as good as his males. He has a very pleasant voice that is easy to listen to. There were no background noises or any breaks take that I could tell. No places where the volume was higher or lower. His character voices were very pleasant. He tells the story so well you can almost picture things as they happen. He really gives life to this audio that I feel might be a little flat if reading it. I look forward to listening to more of his work.

There isn’t a lot that can be told of this story without giving it away. The author does put a few twists in that you won’t see coming. It is well written for a short story never leaving things out. He does skip ahead a few years but you know just what happen before with no guessing. I enjoyed and liked the characters each having their own part to the falling of the human and robots. I think most will enjoy this.

What did you love best about Roof?

The whole story was very enjoyable, Robbie the Robot was a very likable character, as was Peter Harkness!

My favorite scene was when Robbie decided to start telling jokes.

I laughed a lot.

The narration was awesome, he really set the moods. I highly recommend this book and author.

I listened to the audio book. If you have not listened to many audio books, give this one a try. This one shows audio books at their best. It has a great story and an engaging narrator. The larger view of the story can be viewed as corporation greed and corruption. The smaller view is much more interesting and that is what the author focuses on. People being replaced in their jobs by robots.

Peter is the main character, a man in fear of losing his job. He watches his coworkers being replaced. I really liked Peter. I enjoyed his relationship with the robot Robbie. Robbie is my favorite character. His jokes were some of my favorite parts of the book. He is very likable.

After reading a couple of the author's other books, I was waiting for a twist. I was not disappointed. In fact, I was delighted. This is my favorite book by this author. I honestly am going to recommend it to all of my book friends whether they love science fiction or not. I think it is broader than the sci fi genre. Completely entertaining, stop reading this and star reading the book. You will not regret it.

I highly recommend this book. The author has a way of writing in an entertaining manner yet providing his view on moral and social obligations. His World building was such that it grabbed me and pulled me into this world that I could possibly even see our world becoming. his style of writing is reminiscent of Isaac Asimov and Ayn Rand.

I was supposed to be reading this with a group but I decided that I was going to start it early and listen to the audio book. It normally takes me a few weeks to get through an audio book because I just don't have the time to dedicate to it. It was addicting and I listened to it in one sitting. The narrator did a fantastic job and really grabbed my attention and never let it go. I feel it is best when you listen to the audio because it gives you the full experience.

The story was absolutely fascinating. I couldn't stop listening. I wanted to know what happened and how each character was going to react. I loved the character Robbie. He was an unlikely hero and I slightly love him. Peter was the perfect point of view for the story. He was kind and smart. I really enjoyed his voice and loved the story line.

My favorite moments of the book was Robbie's jokes. They made me smile and know that something was different. It gave you a new perspective of him.

I look forward to reading more work by this author because I love his style.

This is a great book about a lonely man working for a big corporation that little by little replaces all the humans with Artificial Intelligence (AI) workers, sounds awesome right? But is it really?

This book was so well written that you won't see the ending until it jumps up and slaps you in the face. I am purposefully not going to write much so I don't accidentally spoil anything. But know there is plenty of action and it is just a wonderful, wonderful book. I had the audiobook version and James Foster did a great job of bringing this book to life through his awesome narration, this is my first audiobook with Mr. Foster but it certainly won't be my last, I will be looking for more audiobook narrated by him.