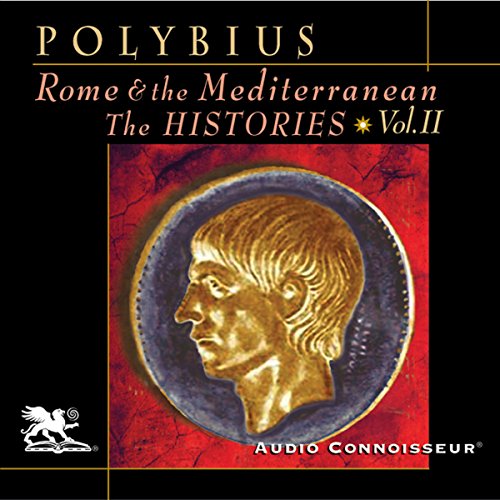 Rome and the Mediterranean Vol. 2

By: Polybius
Narrated by: Charlton Griffin
Try for £0.00

After 18 years of desperate struggle, Rome has gradually turned the tide against Hannibal, and now the Carthaginian finds himself bottled up in the toe of Italy while Scipio ruthlessly tightens the noose around Carthage on the African mainland. Knowing that Hannibal must sooner or later abandon Italy and come to the aid of his countrymen, the brilliant Roman commander prepares for the inevitable test of strength. It is not long in coming.

Volume 2 of Rome and the Mediterranean brings to an end the long and violent struggle between Scipio and Hannibal. The grand spectacle of naval and land battles, the political intrigue and tribal quarrels, and the interminable squabbles among the Greek city states...all comes to an end. Roman hegemony is now complete. If for no other reason, the pleasure of reading Polybius is his penetrating character analysis of the leading men of his day.

There is something peculiarly modern about Polybius, though in his own day he was criticized for his lack of "style". In fact, by the time of the third century A.D., he had largely been forgotten in the West. He was resurrected in the Renaissance and found greater and greater support among republican thinkers, especially those of the Founding Fathers of the American Revolution. Until recently, Polybius was read only by those interested in Roman Republican and Greek Hellenistic history. However, his spectacular ability to draw the reader into the drama of the historical narrative has made him popular among modern readers, and all the more so as he is the primary source for those events in ancient history which are today considered not only of the utmost importance, but also of enduring interest. It is a great pity that his work did not survive intact, though we should consider ourselves fortunate to have what is left.

What listeners say about Rome and the Mediterranean Vol. 2