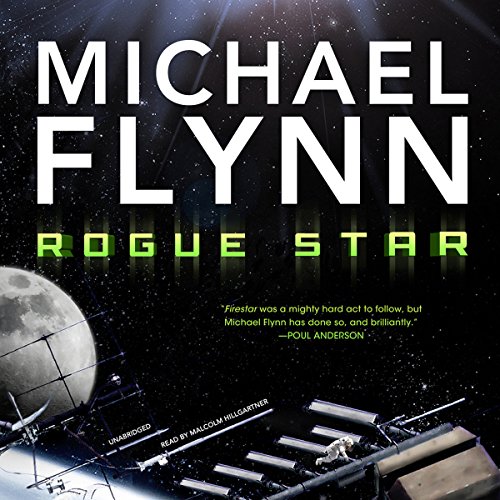 By: Michael Flynn
Narrated by: Malcolm Hillgartner
Try for £0.00

Michael Flynn opened his saga of near-future technology and space exploration with Firestar, in which he introduced a set of characters orbiting around one powerful and determined woman: Mariesa van Huyten, who is obsessed with the need to get humanity back into space and to save Earth from disaster. In Rogue Star, van Huyten’s struggles continue.

Three astronauts are headed out beyond Mars on the first human trip to the asteroid belt. In orbit around Earth, a construction crew is building the first permanent space station, owned by van Huyten’s consortium. Meanwhile, the president of the United States is trying to force her into making a secret deal to put weapons in orbit so he can intervene in the ongoing wars.

Van Huyten’s plan is in place - and some people will kill to stop it.

"Hard SF is often authentic but rarely this well written, and Flynn’s history looks on course for enlivening the genre with intelligence and subtlety." ( Vector)
" Firestar was a mighty hard act to follow, but Michael Flynn has done so, and brilliantly. Rogue Star continues the story, with the same imaginative realism, suspenseful narration, and vivid humanness, plus all sorts of new ideas and insights." (Poul Anderson)
"Flynn has produced a well-written hard SF novel brimming with vivid characters, realistic scenes of life in outer space, and just a touch of genuine strangeness." ( Publishers Weekly)

What listeners say about Rogue Star

Makes me hopeful it could really happen. I wish we had our own rich lady.

Good story line and great narrative development was good on each caricature. Storytelling by reader was great

Great near-future science fiction. Listen to Fire Star first to meet the characters. Cliff hanger ending, so plan on getting the next book in the series.

Hard to listen to and hard not to

No, the book is 45% interesting and 55% non intersting. Spends a lot of time say big goverment is bad (which it is) and that big business is good (which it is not).