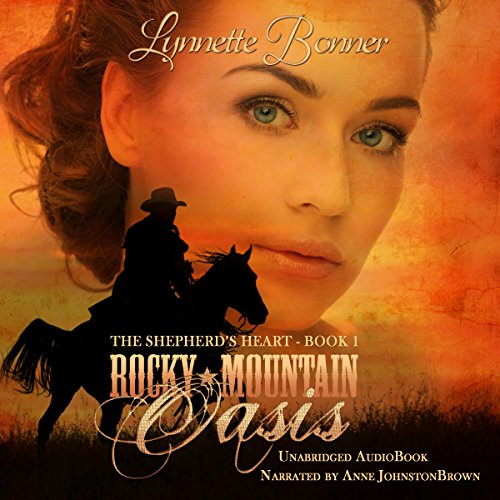 He's different from any man she's ever known. However, she's sworn never to risk her heart again.

Brooke Baker, sold as a mail-order bride, looks to her future with dread but firm resolve. If she survived Uncle Jackson, she can survive anyone. When Sky Jordan hears that his nefarious cousin has sent for a mail-order bride, he knows he has to prevent the marriage. No woman deserves to be left to that fate. Still, he's as surprised as anyone to find himself standing next to her before the minister.

Brooke's new husband turns out to be kinder than any man has ever been. But then the unthinkable happens and she holds the key that might save innocent lives but destroy Sky all in one fell swoop. It's a choice too unbearable to contemplate...but a choice that must be made.

A thirsty soul. Alluring hope. An oasis of love. Step into a day when outlaws ran free, the land was wild, and guns blazed at the drop of a hat.

A DIFFERENT KIND OF GROOM

What made the experience of listening to Rocky Mountain Oasis the most enjoyable?

The reader's voice is smooth and easy to listen to. She makes each character's dialogue distinct.

What was one of the most memorable moments of Rocky Mountain Oasis?

Brooke sees her prospective groom standing to one side, holding one daisy to give her -- the only wedding flower he could find. She dreads being married to this man, but feels strangely drawn to him. Will she be able to save his life or will she choose to relinquish his in order to save others' lives in the town?

What does Anne Johnston Brown bring to the story that you wouldn’t experience if you just read the book?

Her rendition of the story brings drama to an already dramatic novel.

Yes! Who could turn it off?

ROCKY MOUNTAIN OASIS is a page-turner. You'll catch your breath every few pages.

Have you listened to any of Anne Johnston Brown’s other performances before? How does this one compare?

Would you consider the audio edition of Rocky Mountain Oasis to be better than the print version?

I didn't read the print version.

My husband and I share an account so this is Samantha. I always remember the men better :) Sky is my favorite I like his character. He wasn't weepy like some men in romance novels. He was a good strong character.

Which character – as performed by Anne Johnston Brown – was your favorite?

She did a good job on all of them. I like her Sky voice I almost always knew when it was him just by his voice.

Who was the most memorable character of Rocky Mountain Oasis and why?

Sky again. I also liked the China lady that ran the store. My mind is terrible with names and I don't think you can ever get into a story as well when you listen to an audio book. You miss little things and I will more than likely listen to this again at some point.

Thoughts from Samantha. I liked this book it made me cry once, sorry I'm terrible at names, when the man came back to give his money back to Sky for the purchase of the bride that got to me. I love it when people come to the Lord.

If you like westerns you'll enjoy this. The narrator is great she does such a good job. The storyline is believable, and the settings are great.

Ms. Bonner has perfect diction. That would normally be a postitive comment. However, in a western historical book, to hear her pronounce every consonant did not fit the book. Even when reading the voices of roughened, uneducated cowboys, they had perfect diction.

The story didn't speak to me as I was continually cringing at the narration. Perhaps the author is also responsible for using language that wouldn't commonly be in the vocabulary of a frontiersman.

Great story and fun read. Predictable in many ways, but still a really well done book. Will be interested in other books by this author.

Great story. Biblical references. History and love in its purest form, no language, will read more in series!

A story of extraordinary kindness, when a mail order bride is sent to the Rocky Mountains, bought by a rough, hard drinking man with vile intentions . . . but intercepted by his cousin, Sky who, by God's grace marries Brooke instead . . . this is a Christian romance . . . and I have to say that I am not big on strictly romances . . . and in the beginning, this one wore on me a little . . . too much "thinking" about Sky, then thinking about her past, and back and forth . . . for what felt like forever . . . but it eventually picked up and got to the "meat" of the story . . . and a wonderful story it is . . . Sky is the local lawman, and his father is also a lawman . . . the story of his parents and how they came to know the Lord is the BEST ever . . . don't miss this one!

What made the experience of listening to Rocky Mountain Oasis the most enjoyable?

How Sky never waivered on his promise.

What other book might you compare Rocky Mountain Oasis to and why?

Would you be willing to try another one of Anne Johnston Brown’s performances?

She kept over emphasized words that were not the correct pronunciation, i.e. didn't into did-dent. At first I believed she must be British, but after researching I found she was not. I continued to be distracted by this and couldn't keep my mind on the story. Most people do not talk like this, especially mountain people!

The story about the mail order bride was pretty good. Kind of typical plot line. But the story was ruined by the constant over the top preachiness of the entire book. I believe in God, and certainly don't mind a bit of Christianity in a book, but this writer was too much. I felt a bit like gagging a few times. Maybe the writer is torn between the desire to be a writer or to be a minister, and decided to do both. If that is the case, then she hit the nail on the head! If that sounds like a good mix, then this is the book for you. Me. Not so much.

Would you recommend Rocky Mountain Oasis to your friends? Why or why not?

No, I don't think any of my friends would enjoy the over emphasis on religion in the book.

I don't think I have one.

Less religion would have helped. I think you can portray some morality and strong belief in the characters without them sounding too much to be believed.

Glad i chose this book. I really enjoyed it, easy listen and and past events are woven clearly and easily into current time. There is a lot of reference to Jesus Christ, as he is the hero's guiding light, and i found myself truly enjoying the way this creates the journey for the characters, not over the top but touching. Makes you think and feel. Enjoyable.