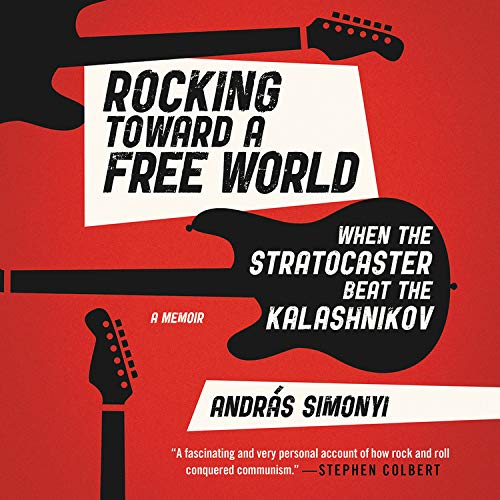 Rocking Toward a Free World

From renowned diplomat and musician András Simonyi - whom Stephen Colbert calls "the only ambassador I know who can shred a mean guitar!" - comes a timely and revealing memoir about growing up behind the Iron Curtain and longing for freedom while chasing the great power of rock and roll.

In Rocking Toward a Free World, Simonyi charts the struggle of growing up in 1960s Hungary, a world in which listening to his favorite music was a powerful but furtive endeavor: records were black-market bootlegs; concerts were held under strict control, even banned; protests were folded into song lyrics. Get caught listening to Western radio could mean punishment, maybe prison. That didn't matter to Simonyi, who from an early age felt the tremendous pull of rock and roll, the lure of American popular culture, and a burning desire to buck the system. Inspired by the protest music coming out of the West, he formed a band and became part of Hungary's burgeoning rock scene. Then came the setbacks: tightening of control by the state, the seemingly inescapable weight of an authoritarian system, and the collapse of Simonyi's own dreams of stardom.

A story of youth, rebellion, and hope, Rocking Toward a Free World sheds new light on two of the most powerful forces of the modern age: global democracy and rock and roll. Deeply vital and compelling, Simonyi's memoir chronicles how one man's tremendous connection to American and British popular music inspired him to make a difference in his country and, eventually, the world. It tells the story of a generation, as played out in song lyrics and guitar riffs.

"Around 2004, it came as a great surprise to me that my band, Traffic, was one of the first western rock bands to play in Hungary after the uprising, which took place there in 1956. András was at the show I did in 1968, and although we were kept separated by the audience, András made brief contact with us. Since that time, he has become a friend, a champion, and an ardent believer in music as the universal world language of peace." (Steve Winwood)

"András Simonyi was a great ambassador from Hungary to the United States. Now, he's a great ambassador for rock n' roll, showing readers how American music penetrated through the Iron Curtain and inspired a generation." (Former Secretary of State Madeleine K. Albright)

"A fascinating and very personal account of how rock and roll conquered communism. I felt like I was right there as music took the stage, witnessing a man and country change before us." (Stephen Colbert)

"Whether through the skillful practice of diplomacy or guitar, András Simonyi understands better than most how the power of music can unite cultures and countries the world over. This stunningly detailed and inspiring personal account will entertain revolutionaries and rockers alike." (Nancy Brinker, founder of Susan G. Komen for the Cure and New York Times bestselling author of Promise Me)

What listeners say about Rocking Toward a Free World